Once again – Happy New Year to everyone!  2017 was an eventful year and I want to review briefly a few of the highlights (and low lights) for me.

The most worrisome issue that we still face is that of pull incentives for antibiotic R&D. DRIVE-AB has published a summary (this is a link to my blog on this topic) of their recommendations, but their final report originally planned for November is still not available.  Among other options, they highlighted the hybrid model where a market entry award would partially “de-link” revenues from sales volume.  In this model, a company would receive a sum of money on a contractual basis over the first several years after market entry.  At the same time, sales would be allowed to occur and revenues could increase over time. Another model discussed by several experts (see the same blog) was the patent exclusivity voucher approach.  I favor both of these.  The bad news is that NO ONE is making clear progress bringing one of these to reality.   There are more and more papers, reviews and yes, blogs, on the topic but as far as I can tell, there is no concrete action like legislation either here in the US or I Europe that is likely to actually become law in 2018.  But we can always hope.  We should also ACT and keep up pressure on our representatives in government to make this happen.  As I’ve said many times, this is the last frontier! 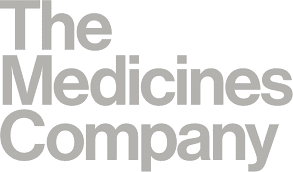 Linked to the failure to fix the broken antibiotics market, in my view, is the sale of the Medicines Company antibiotics assets to Melinta occurring just after the approval of MedCo's anti-KPC drug Vabormere.  Melinta’s delafloxacin was also just approved in 2017. It remains to be seen what will happen to the outstanding antibiotic research group that was housed within the Medicines Company and that discovered the B-lactamase inhibitor that is part of Vabormere, vaborbactam. I strongly believe that if there had been a market entry reward for which Vabormer would have qualified, the Medicines Company would not have been so quick to jettison their antibiotics assets and their researchers (see my blog on this).

There were a number of developments on the regulatory front in 2017.  I did not blog on all of them – but John Rex is keeping careful track of all these developments. I believe that we will see a guidance in 2018 on the development of antibiotics specific for pathogens like Acinetobacter baumanii and Pseudomonas aeruginosa. John covered the FDA workshop on animal models for pathogen specific antibiotics in March of 2017 for this blog.

The European Medicines Agency is moving from London to Amsterdam.  I am not sure what, if any impact this will have on the way Europe views antibiotic R&D. I worry about this move since I think that the EMA in London has been a shining light for all of us even in the face of the darkness that surrounded the FDA for a number of years. I also worry somewhat about the efforts at harmonization currently gong on between FDA, EMA and other regulatory agencies.  On the one hand, this could be a very good thing and will simplify trial designs for antibiotics.  On the other hand, I am hoping that we can forgo some of the early endpoints that the FDA uses for antibiotic trials in pneumonia and skin infections.  I still favor cure at test of cure as required by EMA as an endpoint here. 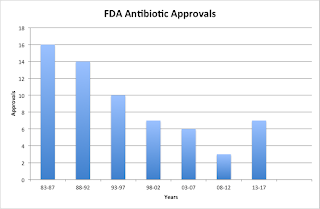 The numbers of antibiotic approvals has risen in the last five years.  Whether this will be a sustainable trend or not and whether the drugs in development will truly address the new WHO priority pathogens or not remains to be seen.

A potentially important highlight for 2017 was the paper by Richter et al on how antibiotics enter Gram-negative bacteria and avoid efflux. This was the topic of the blog in May. Richter and coworkers showed that a primary amine was good, rigid was better than flexible and flat was better than globular. Whether these rules will turn out to be universally applicable is not clear – but to me, this was a major milestone.  At the same time, a proposal that I helped formulate to establish a Manhattan Project to attack this very problem, we called it OMEGA, never succeeded in getting the necessary funding to get it off the ground.

In 2017 I saw how physicians face difficult decisions on how to treat highly resistant Gram negative infections every day on hospital wards. The case described in the blog I linked was one where ceftazidime-avibactam was a key component of the therapy that was required for this complicated polymicrobic infection. I am gratified that avibactam plays this role and I only hope that other B-lactamase inhibitor combinations that can be useful, such as aztreonam-avibactam, eventually see the light of day in the marketplace.

I hope that 2017 will mark the beginning of the end for colistin and polymyxin. At least two antibiotics have now been shown to be superior to these drugs that are highly toxic and not very efficacious.  I worry that antibiotic pricing will continue to apply pressure on hospitals and physicians to use these inferior therapies and I will have more to say about that in an upcoming blog.  Stay tuned.

In the meantime, I wish all of you a healthy and happy year to come and I fervently hope that some form of market entry reward becomes a reality in 2018!