There have been at least two recent developments on proposals for pull incentives.  One comes from the DRIVE-AB meeting this month and the other from the Office of Health Economics in the UK.  Both recommend “partial de-linkage” models. As I have said consistently, de-linkage is a non-starter and I think the prevailing opinion is now in agreement with that view.  De-linkage means that there would be no “marketing” spend by companies in the sense that they would not need any “sales” to support income.  Revenues would come entirely through a market entry reward of some sort. But this approach divorces the company from needed physician educational efforts and provides no incentives for generics to enter the market after the expiration of exclusivity for the product.

The recommendation from DRIVE-AB is illustrated below. It shows a market entry reward starting payments at the time of drug approval and continuing for five years. At the same time, the company is allowed to charge some price for the drug that is sold during those years.  The company can earn sales revenue both during the five years of the reward payments and thereafter. The reward remains contingent on various milestones that the company must meet including manufacturing, physician education, microbiological surveillance and other activities essential to introducing a new antibiotic to the market. DRIVE-AB predicts that this approach would stimulate antibiotic R&D to the extent that antibiotic approvals would quadruple over the next thirty years.  Personally, I think that probably does not take into account sufficiently the scientific risk inherent in antibiotic discovery and therefore that this is an optimistic prediction based on historic rates of approval. Nevertheless, I agree that this would clearly stimulate antibiotic R&D and would motivate investors and companies to continue in antibiotic R&D or to get back in that business. 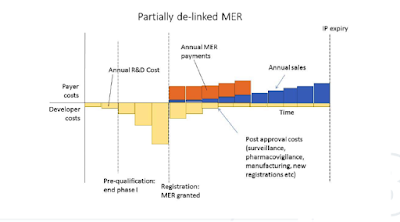 The new publication from the Office of Health Economics promotes an insurance model as a market entry reward. In this model, with the approval of a new, needed antibiotic, company would receive sufficient reimbursement to provide for a net present value (NPV) of $100 million. This would cost the health system something like $262 million per year over ten years or $2.6 billion.  The question for me is, is $100 million in NPV enough? The answer from the marketing folks at Wyeth in the year 2000 was “no!”

Both of these models and a number of others, including and especially the exclusivity voucher model, could work. The insurance model is a better fit in Europe where most countries provide some sort of national health insurance already.  It is probably not a good fit in the US. I guess I don’t see anything wrong with different countries using different approaches as long as there is a clear and predictable return on investment for the companies such that they are motivated to continue or to re-enter the antibiotic research field.

I see a number of questions that are still extant. First -  how much do we really dislike and distrust the pharmaceutical industry that will be the source (in all likelihood) of these new products? During a recent lecture one of the audience members posed an interesting question. “If we are going to have to spend this amount of money, why wouldn’t we spend it on research in a government antibiotic R&D effort that would not require profits?” I’m sure this question comes, in part from a basic distrust of and anger towards a pharmaceutical industry that many see as consistently gouging consumers. And who can argue with that?  My answer was that the expertise exists today within industry.  But I suppose that could change, even though I remain extremely skeptical.

Another remaining question revolves around the numbers. How much NPV should society provide?  This, in turn, depends on how we value new antibiotics active against key resistant pathogens. It also depends on how we value the existence of a robust pipeline that is, in a way, our insurance against emerging resistance to the new agents that we are using sparingly hoping to avoid the rapid emergence of resistance.

No matter which model we prefer for pull incentives, and no matter whether we are angry at the pharmaceutical industry, we still need a robust pipeline of new antibiotics for the future.  And the only way we will get there is by assuring companies, at least for the foreseeable future, that they will have a sufficient enough return on their investment that they should, in fact, invest in antibiotic research and development.
Posted by David Shlaes at 6:11 AM