OK.  So this is a few months late. Mea culpa.  But since the FDA advisory committee meeting on Cempra’s solithromycin, I have had a number of questions from readers and colleagues on the FDA decision to request additional safety information before approving Cempra’s antibiotic for the treatment of pneumonia. I would point out that Harald Reinhart has already posted a timely analysis of the situation. 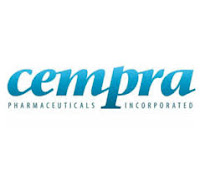 To put things in perspective, we must go back to the Ketek (telithromycin) scandal of 2006. Ketek was approved in 2004 for the treatment of pneumonia, exacerbations of chronic bronchitis and sinusitis – by a circuitous route (see my book Antibiotics the Perfect Storm for details).  After several reports of serious liver toxicity appeared, the FDA re-reviewed their prior approval. It has been calculated that the rate of liver injury caused by Ketek is 5.5 per 100,00 courses of therapy and the rate for serious liver toxicity is between 0.5 and 1 case per 100,000 courses of therapy. These numbers are similar for what you would see with other macrolide antibiotics and are better than rates for serious reactions to other antibiotics like the penicillins as Bob Moellering and I pointed out.  The FDA withdrew their approval for bronchitis and sinusitis, but left the approval for treatment of pneumonia in place judging that the risk benefit for pneumonia was still favorable.

When solithromycin was being studied by Cempra, the company touted the lack of binding to the nicotinamide acetylcholine receptor as being the key to its lower levels of toxicity for both the eyes, in cases of myasthenia gravis and even for liver toxicity. But as it finally became clear in their toxicology studies of solithromycin in animals, the liver was the main target organ for toxicity from this drug.  In their phase 3 clinical trials there was certainly a trend for more liver injury in the solithromycin treated patients compared to those receiving moxifloxacin (see FDA briefing document). Then – the company embarked on longer-term solithromycin treatment trials for chronic bronchitis and for non-alcoholic steatohepatitis (fatty liver disease) hoping that the anti-inflammatory effects of the drug would be beneficial here.  They did this knowing that long-term treatment in monkeys increased the risk for liver injury.  Sure enough – the few patients treated in these long-term trials did show evidence of liver injury.  This was enough to make the FDA advisors hesitate to agree that the company had demonstrated that the drug was safe – although the majority did agree that the drug worked for the treatment of pneumonia. The FDA responded with a requirement that the company carry out additional safety studies to reassure us that there is not a greater risk of serious liver toxicity than we see with other antibiotics.

Of course, like telithromycin, solithromycin is active against pathogens, especially those that cause pneumonia, that are resistant to other macrolide antibiotics.  This is an important advantage because it could decrease use of the quinolone antibiotics that are associated with an increased risk of C. difficile diarrhea – a potentially fatal complication. These ketolides also offer a potentially more efficacious alternative to the penicillins for penicillin-allergic patients. Did the FDA over-react here? In the case of Ketek – they left the approval for pneumonia intact – partly based on evidence obtained post-market over millions of treatment courses. For solithromycin, we have no such assurance.  How do we know that solithromycin is not, in fact, more toxic than telithromycin or a number of other antibiotics?  The animal data certainly gives one pause and the number of treated patients is too small to judge the extent of clinical toxicity here. Another bothersome fact is that the arguments of Cempra that this drug would be much less toxic based on data surrounding a single receptor and its interaction with various macrolides turned out to be so much hot air.

So, unusually, I must come down on the side of FDA and its advisors in the case of solithromycin.
Posted by David Shlaes at 10:22 AM No comments:

Thanks to John Rex for notifying me about the two developments I will discuss here.

The first is an upcoming (March 1) FDA Workshop entitled, “Current State and Further Development of Animal Models of Serious Infections Caused by Acinetobacter baumannii and Pseudomonas aeruginosa.”  The FDA recognizes that clinical trials for pathogen-specific antibiotics will be difficult when the number of infections targeted by the product is expected to be small. They also recognize the value of animal models in predicting both antibiotic dosing and efficacy in humans. As summarized by the FDA, the purpose of this workshop is to discuss “the additional scientific work needed to evaluate current animal models of infection and evaluate potential animal models that may predict response in humans could advance the development of antibacterial drugs targeting a single species.” No briefing materials are posted for the workshop, so I can’t provide specifics as to FDA thinking here.  During the last FDA workshop on pathogen-specific antibiotics, we discussed the potential to use the animal efficacy rule that the FDA has established for special pathogens like antrax and plague where clinical trials for efficacy are not feasible at all.  This is Rex et. al.’s (requires subscription – sorry) Tier D pathway for antibiotic approval. I thought that the consensus at the workshop was that such an approach was not necessary since some clinical data relevant to efficacy could be obtained even if the data were limited.

On the other hand, as I noted, Paul Ambrose kept pointing out that if inferential trials for these products were not possible, animal models and PK/PD could provide a strong rationale for approval. It looks like the FDA may be trying to put investors’ money in Paul’s mouth (or something like that).  It looks to me, trying to read between these lines, like the FDA wants to try and put a more standard definition around the kind of animal models, perhaps even specifying strains of bacteria to be studied and methods to be used, such that uniform datasets can be evaluated when looking at different products. I would anticipate that some clinical data will also be required for approval.

It seems clear that this will be an important workshop for those interested in pathogen-specific antibiotics and especially for those with expertise in animal models and PK/PD. Will we see further guidance on this from FDA this year?

A separate development that might be of interest to antibiotic developers comes from Europe and EMA.  I mentioned in my previous discussion of pathogen-specific antibiotics that Europe had more tools available with which to approve products where robust clinical trial data are not readily available. One of these is conditional market approval (CMA).  The FDA has a similar pathway for approval – but it relies specifically on the availability of biomarkers – something we do not have for antibiotics (with the exception of TB). The EMA just completed an analysis of products approved under their conditional approval pathway since 2006. According to EMA, “medicines that were granted a CMA target seriously debilitating or life-threatening conditions such as HIV infection, breast cancer, severe epilepsy in infants or multi-drug resistant tuberculosis. 14 were orphan medicines.”  But a CMA is valid only for one year at which time the conditional approval must be renewed or new data must be presented to allow for full approval.  In 90% of cases, sponsors complied with the requirements of EMA in seeking full market approval and in 70% of cases, sponsors were able to comply with pre-discussed timelines for achieving full approval. Obtaining the data required for full approval took an average of four years.  But this means that for those four years, important new medicines were available for the patients that needed them during which time companies were able to successfully gather data to further support marketing approval (See Figure below). Although the FDA is still faster than EMA for full approvals in general, one must envy the Europeans for their more broadly applicable conditional approval pathway. 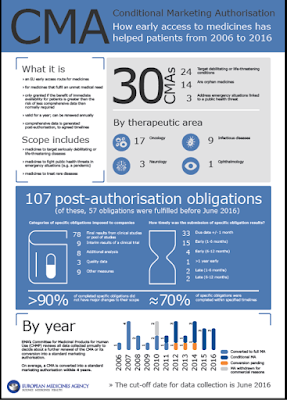 Posted by David Shlaes at 9:22 AM No comments: