On December 4 and 5, the FDA is gong to hold back-to-back advisory committee meetings.  On Dec 4, the meeting will discuss clinical development approaches for antibiotics designed for patients with unmet medical need – in other words, those with serious infections caused by highly resistant bacterial pathogens.  On Dec 5, the committee will consider the submission by Cerexa/Forest/Actavis for ceftazidime-avibactam in the treatment of intra-abdominal, urinary tract and other infections where resistance is problematic.  These meetings could be of historical importance.  I won’t have the space to deal with the Dec 5 meeting preview here –the FDA has not yet released the background materials for that meeting – more later.

The FDA has already released background material for the December 4 meeting on the development of antibiotics for unmet needs. I have read this document and find myself, once again, disappointed. About half of the document is a historical review justifying the FDA approach to non-inferiority trials over the last several decades. They now say they are very satisfied with the outcome of their labors and are ready to move on to the next thing.  Unfortunately, while they may be satisfied with themselves, I think it is too early to pop the champagne. I can only conclude that this part of the backgrounder is more for FDA’s political watchdogs in congress than for anyone truly interested in bringing new antibiotics to the patients and physicians who need them. While I agree that the FDA has made significant progress in at least allowing the conduct of clinical trials that are actually feasible in the real world, the endpoints they have chosen for these trials still leave much to be desired. I won’t even begin to talk about the requirement for placebo-controlled trials for sinusitis and bronchitis – that NO ONE has undertaken since the edict came out around 2003. For skin infections, the endpoint remains a decrease in the size of the skin lesion at day 2-3 – not cure. For community-acquired pneumonia it remains symptomatic relief on day 4 or so – not cure. For hospital-acquired pneumonia it remains mortality even though about half of the mortality in this disease is completely unrelated to the infection being treated.  It should be cure of the infection. The situation is still much better and, in my view, more rational in Europe where cure of the infection remains the relevant endpoint for all these infections.

But the most worrisome section of the backgrounder is that dealing with the development of new agents targeting resistant pathogens – the unmet needs population. A few highlights (lowlights) that caught my attention are noted below.

1.     A superiority trial nested within a non-inferiority trial. Actually – this may be a highlight – I’m not sure.  We’ll have to hear the discussion.  But the last time I was involved (indirectly) with the agency on just such a design, we had designated a subgroup of the overall population, those with resistant infections, as an analysis population. Here we were going to look at failure rates for the control antibiotic and the new drug.  We carefully provided for patient safety by excluding patients with the most serious infections from study entry and by allowing a rapid switch either to the alternate regime (blinded) or exit from the study to receive another standard of care antibiotic. The FDA balked at the design because they didn’t like the subgroup analysis portion.  But the backgrounder now indicates that they would accept such an analysis.  Which FDA is which?
2.     For superiority trials, they still seem to be laboring under the illusion that head to head trials are feasible.  They’re not.  See my blog on superiority trials.
3.     As I noted in that blog on superiority designs, externally controlled trials would be the most feasible. But the FDA seems at a loss as to how to actually design such trials. They are harkening back to mortality rates as a preferred endpoint in externally controlled superiority trials – again – for the most part – completely infeasible especially in the circumstance they are discussing – multiple body site infection trials. The FDA seems to recognize the infeasibility of this approach, but they go on to flounder around about other possible approaches.  I’m worried that they don’t know what the endpoints should be at the different body sites.  (Hint – Cure)!!
a.     They suggest the possibility of an externally controlled non-inferiority design where you could actually show superiority.  This at the very least will increase trial numbers and expense at a time when we want to do the opposite and at worst is simply infeasible.
b.     They note that there may be disparate outcomes in different body sites and they give the examples of tigecycline and doripenem in ventilator-associated pneumonia as examples. Clearly they are correct – but good human PK/PD work prior to an efficacy trial should be able to deal with this.  Also, as the FDA suggests, some stratification may be necessary – but this would have to be done in a way that trial size remains small.
4.     They also discuss single pathogen trials. Here they seem to rely on rapid diagnostic approaches that (1) do not really exist and (2) when they are “available” are not sufficiently rapid. (See my blog on rapid diagnostics). Clearly, the FDA is still lost here.
5.     Finally, I will note that in several areas they mention the fatal words “further work.” The last time they said that, related to trials in skin infections, the antibiotic pipeline was set back at least 5 years.

I look forward to listening in on this meeting.  I can only hope that the AIDAC will see some of the same issues that I see and that they will help sort this out – but my expectations are low.

Now, it just remains for me to wish all of you in the US a most happy Thanksgiving holiday.  I’ll probably come back to you after the AIDAC meetings with summaries.

Posted by David Shlaes at 9:36 AM No comments: 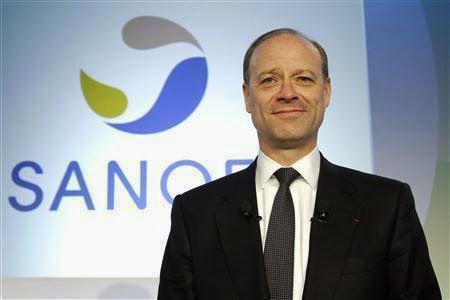 Sanofi CEO Chris Viehbacher was just fired by the Sanofi Board.  Viebacher was previously head of the US business for GSK.  When Andrew Witty was appointed as CEO at GSK, Viebacher jumped ship for Sanofi.  But he apparently brought with him Witty’s and GSK’s passion for antibiotic R&D.

The story of antibiotics at Sanofi is a very mixed one.  At the time of the Sanofi merger with Aventis, Aventis was in the midst of spinning off its entire antibiotic research unit in Paris.  Sanofi, then under the direction of Jean-Francois Dehecq, and after much debate, completed the spin-off to form Novexel in December, 2004.  Novexel was purchased by AstraZeneca in 2009 in a complicated deal with support from and obligations to Forest (now Actavis). Hence, all those Sanofi assets, some after considerable development at Novexel, went to AstraZeneca and Forest.   One of those assets was the compound now called avibactam, which has just completed its phase III trials in intra-abdominal infection and should be approved next year.

Enter Viehbacher 2008.  He quickly decides that exiting antibiotic R&D was a big mistake and he tries to restart the group at Sanofi’s research site in Toulouse, France.  Under his new R&D head, Elias Zerhouni, (an academic researcher who headed the NIH in the US for a number of years under George W. Bush) they hire a new head of anti-infectives research.

Around the same time, with pressure from patent losses, Viehbacher and Sanofi developed a grand plan to reduce costs and increase research productivity by closing research sites in France and moving more research to their new Boston site at their newly acquired Genzyme affiliate. But this led to protests from everyone in France from the government on down to Sanofi employees threatened with job losses.  As a result of this political pressure, their plan went from something like 2500 jobs cut to 800 and counting. Having worked as an executive in France (but based in the US) – I can only empathize with Sanofi management.  France is not a very business-friendly place and necessary strategic restructuring is challenging in the best of times. Part of this plan involved closing their research site at Toulouse where the nascent anti-infectives research group is located.  Within less than two years their new head of anti-infectives resigned. The group was left in better shape in terms of their understanding of anti-infective R&D but worrying about their future either in Toulouse or possibly in Lyon.  The departure of Viehbacher can only add to their anxiety.

Since 2008, anti-infectives research in Toulouse has produced no projects in late stage development. While this is not surprising given that they had to restart essentially from nothing and given the turmoil of the last six years, it remains disappointing.  Perhaps their most important foray in external collaborations was their agreement with Rib-X (now Melinta) in 2011 for novel antibiotics targeting the ribosomes of Gram-negative superbugs. But this apparently led nowhere and the collaboration was dissolved in 2013.

With the departure of Viehbacher, the Sanofi board has apparently already approached Pascal Soriot, the current CEO of AstraZeneca – who wants out of the antibiotic R&D business.  Luckily (as far as I am concerned), he was not interested in Sanofi.  And there, who can blame him given the travails of running a business in France? My big question is – what will happen to antibiotic R&D in the next version of Sanofi?  Will they regroup and make progress or will they join the legions of other companies abandoning the area?  As always, we await further developments.
Posted by David Shlaes at 3:44 AM No comments: