Many thanks to Alan Carr of Needham & Co. in New York for providing the IMS data I needed to look at the question of price perversion in the antibiotic marketplace that I discussed in my last blog.

The chart below is based entirely on IMS sales data for the US that has been converted into prescription data.  As such, it has its limitations. The data starts with the April 2015 US launch of Avycaz. Nevertheless, we can see that the overall treatment of carbapenem-resistant Gram negative infections has decreased since late 2016 – consistent with data showing a decrease in KPC Klebsiella infections during this time.

The graph shows that there are 7-9000 CRE infections treated each month in the US and that these numbers decreased starting in mid-2016. Colistin and polymyxin appear to be used for about half of the total patients even after the launch of Avycaz. Avycaz is used to treat about 2000 patients per month.  The rest are treated with tigecycline or other drugs or drug combinations not including colistin, polymyxin or Avycaz. The fact that Avycaz seemed to have little impact on use of colistin/polymyxin suggests that price perversion is real and is adversely affecting patient treatment. Even if some of the organisms treated were avycaz-resistant because of metallo-B-lactamase expression, most would still do better with Avycaz + aztreonam than they would with polymyxin/colistin (in all likelihood). 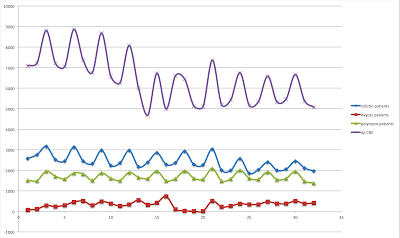 Even though these data are limited by the extrapolation from sales to prescriptions and from the weakness of hospital recording for these IMS data, they are still likely to show real trends in therapy.  And that, my friends and colleagues, is discouraging.  We should be doing all in our power to avoid treating sick patients with colistin/polymyxin regardless of antibiotic price!