OK.  This is a little removed from antibiotics.  But I'm still an infectious diseases physician and this situation makes me angry!

Before beginning my story, let’s review a little bit about influenza vaccines. For a long time we’ve known that older patients and those with certain underlying diseases such as kidney failure, diabetes and others had a lower response to many vaccines than young, healthy subjects. One way to deal with this problem might be to give the vaccine in higher dosage.  This has been done with hepatitis B vaccine in patients with kidney failure as one example – and it does work. Very recently, the same strategy was applied to flu vaccine. A high dose vaccine was developed by Sanofi-Pasteur (Fluzone).  In a clinical trial published in the New England Journal of Medicine, researchers demonstrated that the high dose vaccine was 22-45%more effective at preventing flu than regular vaccine in patients 65 years of age or older. Another study examined all respiratory illness occurring during flu season among older vaccine recipients. This study demonstrated a 13% advantage for the high dose vaccine. There are two other new flu vaccines that may also work better in older patients but the data to support that conclusion for those vaccines is much less strong than the data behind Fluzone (see below). So there is at least one flu vaccine available that works better than other vaccines.

This story starts two years ago at an assisted living facility here in Connecticut where my mother was living at the time. During the winter my mother was telling us about several friends who had contracted “pneumonia” and ended up hospitalized. Some never came back.  I asked the administration at the facility which flu vaccine was offered to the residents the previous fall and discovered to my surprise that they did not offer the high dose vaccine to their elderly residents.  The average age there was probably around 80. I then sent them information on the high dose flu vaccine and asked that they offer it to their residents the next year (last year) – and they did. This past spring my mother moved to another assisted living facility in Connecticut. Thinking ahead, I sent them information from the CDC website on the high dose vaccine and asked them both in writing and in person to make it available for their residents this past fall.  In spite of my request, they decided not to offer the high dose vaccine even though I think the average age of their residents is probably close to 75.

In discussing this situation with friends and with other residents at my mother’s facility, I was surprised to find that no one knew that there was a high dose vaccine and no one knew that there might be an advantage in taking the high dose vaccine compared to any other vaccine. I also called the Connecticut Department of Health and learned that they and no specific policy on which vaccine long term care facilities in the state should offer.  They said that they just go by what the CDC recommends.

And that brings me to the CDC and Advisory Committee for Immunization Practices (APIC). APIC provides recommendations as to which vaccine should be given to which population in what dosage, when and how often. In many cases, these recommendations serve as guidance for insurers for reimbursement policies especially for childhood vaccinations. In considering flu vaccines, the APIC has decided NOT to make a specific “preference” for the high dose flu vaccine for subjects 65 years of age or older.  As such, state health departments and providers have no incentive to offer this vaccine.  Since procurement costs for the vaccine are higher, they may be reluctant to order the vaccine even though it may be better for their patients and their reimbursement will make up the difference in cost.

I spoke with Dr. Lisa A. Grohskopf who is the CDC’s liaison with the APIC. She explained that there are 13 different influenza vaccines available this season of which two are licensed for use in persons aged 65 years of age and older. They are Fluzone, a high dose killed vaccine, and Flublock, a recombinant flu vaccine also using a higher dose of antigen. Data from various clinical trials are shown in table 3 from this CDC webpage. The best data including a study carried over two seasons and enrolling about 32,000 subjects are those for Fluzone*. The improved efficacy ranges from 22-45% improvement as compared to standard dose vaccines depending on which population you are looking at. The APIC will not provide a specific “preference” for this vaccine because (1) there might be differences across different flu seasons (only two were studied); (2) it was not compared to other high dose or newer adjuvanted vaccines; and (3) it is not clear that the manufacturer would have been able to provide it to a larger popultion.  (I did not speak to Sanofi-Pasteur about this). But to me – this reasoning is specious since there was a large randomized trial showing consistent improvements in efficacy across several different analysis populations in two different flu seasons for Fluzone.  If the objection is that it should have been compared to other high dose or adjuvanted vaccines – that seems unreasonable.  Those other manufacturers should be encouraged to come up with the same kind of data that Sanofi-Pasteur provided in order to get a preference for use in older individuals.

The end result of APIC’s dithering is that no one understands that there is a better vaccine available for older individuals and therefore, that those who need it don’t get it.

*I did not count the study shown in the table from 2009-10 where the virus circulating was not present in the vaccine and therefore no conclusions about the relative efficacy of the vaccine could be drawn.
Posted by David Shlaes at 9:04 AM No comments: 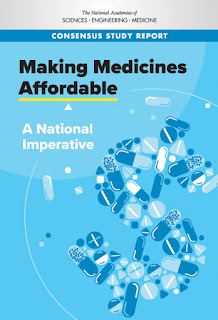 The National Academies of Science, Engineering and Medicine recently released a report on drug pricing.  They also touch on drug shortages. They conclude with Overall sales of biopharmaceuticals globally is over $900 million.  The US accounts for 46% of these revenues.  The next most important region is Europe that accounts for only 21%. Americans spend 30-70% more on drugs on a per capita than other developed countries. 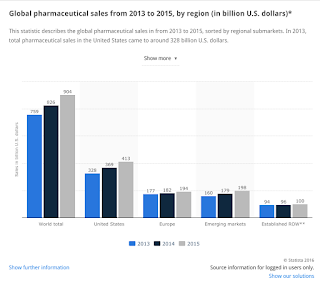 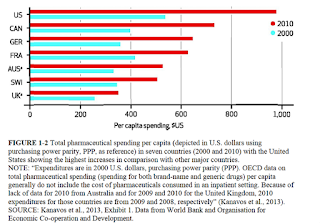 In one of the most ironic observations for me, the report notes that the median monthly cost of cancer drugs at the time of FDA approval increased from approximately $1,500 in 1965 to $150,000 in 2016, stated in constant 2014 dollars…. The complexity of these issues is noted in one study that found that the average price of an episode of treatment using anti-cancer drugs is $65,900 and results in an average survival benefit of 0.46 years (not quality-adjusted). At the same time, the antibiotics market, for drugs that actually save lives, has withered.

Why is this true, what should we do about it and what are the potential consequences of our decisions? The National Academies report delves into this subject in detail and with gust. They provide a number of key recommendations falling under eight general categories.  But – there is little new here and there is nothing we haven’t known for years.  When I was working at Wyeth in the 1990s, the US accounted for 55% of global pharmaceutical sales and profits far outstripping the contributions of other regions.  The reason was and remains the drug pricing structure in the US.  We remain one of the few nations in the world that has no national negotiation for drug pricing. Every time this topic would come up back then (and even now), the industry would cry that any change that reduced their ability to charge higher prices would have an effect on innovation.  And that might be true.  The industry supports its research and development with its profits – usually plowing 10-20% of profits back into research. In this sense, many would argue that the US is subsidizing pharmaceutical research for the rest of the world. If the US were to become like other countries with a more rational approach to negotiation for drug pricing, these revenues would fall. Therefore, research dollars would also likely decline. Why, you might ask, would other countries not pick up the slack? Are you kidding? That seems unlikely to me. But national negotiations for drug pricing is one of the top recommendations by the Academies.

Another key recommendation is to speed generic entry where drug prices can fall as much as 80% or more. At the same time, the loss of competition among generic manufacturers through mergers and other agreements has led to dramatic increases in generic drug prices over time. An overwhelmed FDA has been slow to approve generics – another area that could use improvement – as in more resources.

Drug shortages is a complex problem with multiple causes none of which seem to be the major cause. I refer you to the report for more details here.

The key recommendations from the Academies are listed below.

Recommendation A: Accelerate the market entry and use of safe and effective generics as well as biosimilars, and foster competition to ensure the continued affordability and availability of these products.

Recommendation F: Eliminate misapplication of funds and inefficiencies in federal discount programs that are intended to aid vulnerable populations.

Recommendation G: Ensure that financial incentives for the prevention and treatment of rare diseases are not extended to widely sold drugs.

Posted by David Shlaes at 10:32 AM No comments: