Interview American Council on Science and Health - FDA and Antibiotics

I was interviewed by the ACSH on the commentary we published in AAC.  To see the interview - click here.
Posted by David Shlaes at 3:44 PM 2 comments:

Today you can see our commentary (Shlaes, Sahm, Opiela and Spellberg) (you need a subscription – sorry), published in Antimicrobial Agents and Chemotherapy, entitled, The FDA Reboot of Antibiotic Development. In our commentary, we explore the disaster of the last decade of FDA regulation of antibiotic development, the recent record of FDA antibiotic approvals and the state of antibiotic resistance in the US. In short, the FDA now realizes that their oversight of antibiotic development over the last 10-15 years has, in part, led to a dangerously thin pipeline of new antibiotics.  And they are (thank goodness) rebooting as Janet Woodcock had promised over a year ago.

As part of our analysis of the situation in the US, we looked at key bacterial pathogens in a representative sample of US hospitals both within and outside of intensive care units for the years 2009-2012. We focused on resistance to third generation cephalosporins (exemplified by ceftazidime-resistance) and on resistance to carbapenems (exemplified by imipenem). We realize that there are drawbacks to these choices, but our data was the most robust for these antibiotics. What we found was astounding and is shown in the Table below (from the article) (click on the table to enlarge). 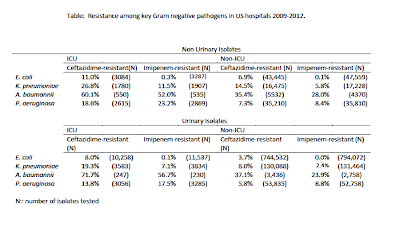 The Centers for Disease Control (using methods different from ours) conducted a study published in 2008. In the CDC data, taken from ICU isolates, the resistance among E. coli to third generation cephalosporins was 5% while in our analysis it stands at 8-11%. K. pneumoniae resistance to third generation cephalosporins was 15% in the CDC study.  In our updated analysis it ranges from 20-27%.  Resistance to carbapenems among these isolates is now between 7 and 11%. For A. baumannii the resistance is even more drastic.  In the CDC report 11% were carbapenem resistant while our data show that number to be over 50%.

These data indicate that for Acinetobacter baumannii infections, the carbapenems are already obsolete.   This holds true for both intensive care and non-intensive care patients and for urinary and non-urinary infections. The same can be said for our third-generation cephalosporins (here indicated by ceftazidime) in the treatment of K. pneumoniae infections.  For these organisms, the carbapenems are also rapidly losing efficacy. Even among E. coli isolates, our third generation cephalosporins are no longer completely reliable although the carbapenems remain a solid backup.

Clearly, if this does not yet constitute a public health crisis, we are rapidly moving towards one. We will continue to face more and more infections for which are treatment options are worse and worse, even with the late stage pipeline of new antibiotics we now have in place. The FDA is responding to this desparate need.  They have issued new guidance (as covered in a previous blog) on the development of antibiotics targeting patients with highly resistant infections. They still need to revamp more traditional approaches to antibiotic development before their reboot can be considered to be near completion. The next steps on the FDA reboot cannot come too soon.

In our commentary, we also point out that regulatory reform will still probably not be enough.  We will still need value-based pricing (see last blog) in order to make the final leap to enticing large pharmaceutical companies back into antibiotic R&D. We hope that both complete regulatory reform and value based pricing come to pass since the alternative is too terrible to contemplate.
Posted by David Shlaes at 1:00 PM 1 comment:

I was intrigued by a recent piece in Genetic and Engineering News on the political scene around antibiotics and antibiotic resistance.  One focus of the article was on the STAAR (Strategies to Address Antibiotic Resistance) act currently wending its way through congress. There is much to like about this effort.  It provides for a sort of advisory (not really oversight) board of experts (specifics to be determined) to coordinate efforts across all of HHS including NIH, CDC and FDA. Of course, its not like this has not been tried before – e.g. the Antimicrobial Resistance Task Force involving the same three agencies.  That task force was limited by funding and turf battles.  How the same sort of boondoggle will be avoid in the pending legislation I don’t know. Another bit would be to add IDSA’s LPAD (proposal for the FDA on Limited Population Antibiotic Development from the Infectious Diseases Society of America) to STAAR. As I say, as a concept there is much to like here.  But as soon as you get into the details, it’s a morass.

First, the statutory requirement  for LPAD legislation is not at all clear to me.  Second, since the FDA has issued guidance on what is essentially and LPAD pathway, one might question the relevance of the legislation. Also – without clear leadership and a hard line manager at HHS, I don’t see the coordinating aspect of STAAR coming together to say nothing of the need for actual dollars to back the new efforts. So I’m skeptical.  I hope that someone from, say IDSA, can set me straight.

Beyond the politics, this entire effort misses the point.  I hate to point this out – but where have the dollars for surveillance for resistance been coming from for the last two decades?  In large part this is being funded by industry.  Of course, as industry drops out of antibiotic R&D and as their products become generic – these dollars will dry faster than mud in a drought. For surveillance and for the new products that we need to deal with resistant organisms we need MONEY!!!!  Unfortunately, these dollars will have to come from pricing for the new products we so desperately need.  This price increase will also probably have to be global to one extent or another.  Europe – I’m speaking to you!!  Yes, UK France, Germany – regulatory reform won’t be enough – new antibiotics to replace colistin might actually cost you silver. And who knows about pricing in China?  Are there any experts out there willing to share their knowledge.  How about India?

Clearly the time for value-based pricing has arrived.  We are already providing funding (mainly through BARDA) for antibiotic R&D in addition to making trials smaller, faster and less costly through regulatory reform. The last step in the pathway is pricing. Rather than spending effort on STAAR – maybe we should focus on the one thing that will make the most difference – MONEY and VALUE-BASED PRICING!
Posted by David Shlaes at 4:37 AM No comments:

Hang on to your hats ladies and gentlemen!  The FDA has just released a NEW GUIDANCE ON THE DEVELOPMENT OF ANTIBIOTICS FOR PATIENTS WITH UNMET NEED IN THE TREATMENT OF SERIOUS INFECTIONS!!  This is the formal beginning of the reboot that we have all been anxiously awaiting for the last 14 months.  As I will explain, I think this is a very positive step forward and demonstrates that we are dealing with a new, rebooted FDA.  I have been seeing signs of this in my dealings with the FDA (mostly through clients) during the last year – but here is the first concrete public disclosure of the new face of antibiotics at FDA.   This guidance allays my fears that we would have to wait for new LPAD legislation before seeing the reboot.

The new guidance is a very European style document.  It is written in a question and answer style to provide insight into the latest FDA thinking rather than a great deal of specifics. It leaves lots of room for discussion.  Many will complain that there is not enough detail here in terms of designing new trials for antibiotics active against highly resistant pathogens.  But I don’t agree with this stance.  Every other paragraph contains a plea for sponsors to come to FDA and present plans and designs.

Because these drugs will be developed to treat infections in patients who have few or no treatment options, they are likely to be drugs that: (1) act via new mechanisms of action; (2) have an added inhibitor that neutralizes a mechanism of resistance; or (3) have an alteration in the structure of the molecule that makes the drug no longer susceptible to the mechanism of resistance to existing drugs. Due to the paucity of available therapies for many patients with bacterial infections, antibacterial drugs that are intended to treat patients with intolerance or allergy to currently available drugs are also likely to be considered to address an unmet medical need.

The FDA lists possible approaches to development but states that sponsors could use parts or combinations of approaches.  They do state that all approaches would require strong non-clinical support data –

The approaches listed include statistically powered active control superiority trials in either one indication or patients with varying sites of infection.  I feel these are unlikely to be feasible given the expected patient numbers available for study.  Non-inferiority trials with a nested superiority component are also discussed.  But most importantly (at least for me) is a discussion of externally controlled or historically controlled trials.

A clinical trial design that relies on a historical or external control may be acceptable to evaluate efficacy in a patient population with an unmet need, in particular a patient population in which standard-of-care therapy is suboptimal and the investigational drug shows activity in nonclinical and early clinical development such that withholding the investigational drug may be considered unethical. This trial design type generally is acceptable when the untreated morbidity is high and does not vary widely in the patient population enrolled in the trial, and the effect of the investigational drug is expected, based upon early clinical or nonclinical data, to be large compared to historical experience. The outcomes among patients with unmet medical need who received the investigational drug should be compared to the outcomes in an external control group, and should be expected to show a large treatment benefit for the investigational drug, because of concerns regarding potential bias from cross-study comparisons. The information needed to evaluate the historical control response rate is fairly similar to what is needed to support a noninferiority margin in an active-controlled trial, although the goal of the trial is different. In a noninferiority trial, one is seeking similarity to the best-available therapy (i.e, ruling out an unacceptable difference). In the case of the historical control trial, one is seeking an advantage over what is essentially no treatment.
Sponsors considering a trial design that relies on a historical control based on a retrospective review should characterize the proportion of patients with the clinical outcome of interest when given no therapy or inadequate therapy. Current antibacterial drug development guidances contain information on retrospective reviews of outcomes when patients were given no therapy or inadequate therapy in specific disease conditions.

Efficacy endpoints – to be discussed (YES!!!).  Hopefully we can give up on mortality.  I am even hoping for pharmacometric controls and clinical endpoints.  Even surrogate endpoints are up for discussion – but whether the usual FDA evaluation of such will be required is not stated.  I wonder if they will decide that clinical outcome is a surrogate for mortality.???

Although with the old FDA – I would say you never know.  With the rebooted FDA – I am encouraged enough to say that discussions of streamlined approaches to approval of antibiotics active against resistant pathogens is definitely on the table and that they will be sensitive to feasibility. (Always the optimistic pessimist).

What is left unsaid is when the FDA will retract their previously released and completely infeasible guidances for more traditional development. But even here – since they are no longer following their own guidance and since they seem to have learned that they actually have to stick to their words to a great extent, I am optimistic.
Posted by David Shlaes at 2:58 AM 1 comment: