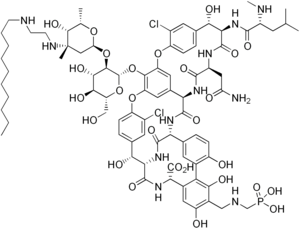 Image via Wikipedia
Europe comes through again!  EMA and CHMP have recommended approval of Theravance-Astellas’ telavancin for use in nosocomial pneumonia based on the same data package rejected by the FDA.  This should be encouraging to all who are developing new antibiotics and for patients and physicians who so desperately need them.  Of course, I’m not so sure that telavancin will answer these needs, but its approval by Europe is nevertheless a very positive sign. This situation is similar to that for doripenem by J&J where it was rejected for the same indication by FDA but accepted by Europe.  These FDA rejections are based on the new draft guidance for clinical trial design promulgated by FDA whereby the infeasible and insensitive endpoint of all cause mortality at 28 days in the microbiologically documented population in the absence of any prior antibiotics and with a non-inferiority margin of between 5.6 and 10% is required.  Europe has clearly (1) stuck with their policy of having their scientific advice be binding such that once trials are completed, if the agreed-upon endpoints are achieved, the product will be approved and (2) rejected the FDA’s guidance on nosocomial pneumonia at least so far.
The ATTAIN data have been published and presented.  I reviewed their data in a previous blog.  The trials showed that telavancin was non-inferior to vancomycin for the endpoint of cure in the all-treated population where cure rates were 58.9 and 59.5% for telavancin and its comparator, vancomycin, respectively.  Of the 1503 such patients across the two trials, 480 were microbiologically evaluable (had only Gram positive pathogens isolated at baseline).  (Parenthetically, if you add those who had gram negatives – this total becomes 629 or 42% having had a pathogen of any sort at baseline). Telavancin remained non-inferior overall in the microbiologically evaluable population. More than half the patients had received an antibiotic prior to enrollment and all were considered to have been failures at the time of enrollment.
It is of great interest that Europe would find that the potential benefits of a new therapy for these severe infections would outweigh the risks of telavancin.  Telavancin is associated with nephrotoxicity at a higher rate than vancomycin and there is a fetal risk.  In addition, recent data from the Zephyr trials indicate that linezolid, for similar endpoints, might be superior to vancomycin in nosocomial pneumonia.  Therefore, one could question the comparator choice for the ATTAIN trials (even given that the trial was designed long before Zephyr data became available). I conclude from these ruminations that Europe, unlike the US, apparently believes that having alternatives can only be good for patients.  Europe also will now leave specific marketing negotiations to member countries who will take all of these factors into consideration when thinking about price and conditions for reimbursement for telavancin. This seems to be another difference between Europe and the US. Europe sees the regulatory approval as one thing and national marketing and reimbursement decisions as something else entirely.
Even though one might be critical of the ATTAIN trial data, there can be no doubt that the data showed that telavancin is non-inferior to vancomycin at the pre-chosen per protocol primary endpoint.  They also showed some toxicity risk of telavancin compared to vancomycin, but in this very sick population, it seems wise to leave a borderline risk-benefit decision to the clinicians and their patients who can decide on a case-by-case basis. In my view, Europe made the right decision.  The marketplace, national authorities, clinicians and their patients, will now sort things out as to whether telavancin is a useful addition to the antibiotic armamentarium for nosocomial pneumonia or not. In this regard, the FDA, in my view, and once again, made the wrong decision.