What have we ATTAINed?

Well – the data are finally out – sort of.  Rubinstein and collaborators have published the results of the ATTAIN phase III trials of telavancin for the treatment of hospital-acquired pneumonia.  Telavancin is being developed and marketed by Theravance and their partner Astellas. The study was completed in 2007 and the NDA was submitted to the FDA in April of 2009.
Two independent trials of identical design were undertaken – ATTAIN-1 and -2. The data show that, for the originally defined endpoints of clinical response in the ITT and in the Clinically Evaluable populations, telavancin was non-inferior to vancomycin.  A record 1532 patients were randomized for these two trials from 274 study sites in 38 countries.  Patient recruitment accrued over 18 months between January 2005 and June 2007 for an average enrollment rate of 0.31 randomized, 0.13 clinically evaluable and 0.10 microbiologically evaluable patients per center per month, . Of the ITT population of 1503 (29 never received drug), only 654 were clinically evaluable, 480 of which were in the microbiologically evaluable population (had a Gram positive pathogen at baseline).  Baseline characteristics were similar between the treatment groups – although 57 and 89 telavancin and vancomycin treated patients resp. required pressor support (P=0.03).  The mean APACHE II scores were around 15-16 and about 25% of patients had scores of over 20 demonstrating that this trial took place in a severely ill patient population. More than half of the patients enrolled had received >24 hours of prior antibiotic and were judged to have been antibiotic failures at the time of enrollment.  The data justifying this classification were not provided, though.
Over 70% of patients with a pathogen isolated at baseline had only Gram-positives present.  Of the Gram positives, almost 90% were Staph. aureus with more than half of these being MRSA.  Against pure S. aureus  infections, telavancin was more effective than vancomycin (84% vs. 74% cured) regardless of whether the strain was MRSA or MSSA.  A vancomycin MIC of >1 mg/L did not affect clinical response to vancomycin therapy. Both drugs performed equally well in mixed infections when Gram-negative therapy was adequate. The overall mortality rate was similar between both groups.  Telavancin was associated with somewhat greater numbers of serious adverse events and discontinuations due to adverse events than was vancomycin, although these differences were not significant.


Key data missing from the publication were mortality (or survival) data at day 28 in the analysis populations – especially in the microbiologically evaluable population.  The latter is now the analysis endpoint in the new FDA guidance on hospital-acquired pneumonia.  I posed these questions to Steve Barriere.  He kindly provided me with slides that were shown at the 2010 JP Morgan Conference. 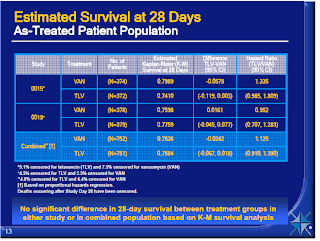 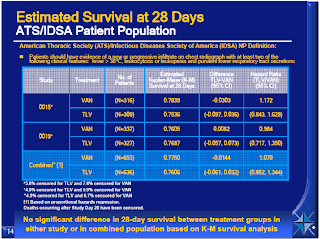 These data show that in the ITT and Clinically Evaluable populations, there is no difference in survival rates as estimated by a Kaplan-Meyer survival curve and that the NI margin is very tight. But, what is still missing, and what Steve Barriere tells me has not been made public yet, are the 28-day mortality rates for the microbiologically documented population.  One wonders why not.
It is hard to understand the difficulties being faced by Theravance and Astellas at the FDA.  I speculated, as have others, that perhaps the two identically designed trials were not viewed as independent by the agency.  But a review of the design and discussions with clinical investigators and the sponsor convince me that they were independent. Maybe the 28-day mortality could not be accurately determined since it was not originally part of the statistical plan for the trial.  But the data provided by Theravance indicate that the mortality data are consistent with the clinical response data. I also wonder why the sponsors have not pursued their case in Europe. I guess all will become clear with time . . .
In the meantime – Happy New Year and welcome back to work!