Asia - Satellite image - PlanetObserver (Photo credit: PlanetObserver)
Where will we find new markets for antibiotics and other pharmaceuticals?  Asia and other emerging economies – that’s where!  According to Bayer, China was their third largest market globally last year.  Asia overall accounted for 7.8 billion Euro (over $10B) in sales for Bayer – a whopping 21.5% of their sales globally. The sales in Asia were very similar to that for North America.  Bayer is a great example since, on the antibiotics side, they sold their North American business to Schering-Plough (now Merck) a number of years ago.  This shows where their thinking was then and how this perception has now been vindicated.
In a report published last year and freely available to all, the Economist notes that pharmaceutical sales in Asia have more than doubled since 2001.  Projections going out to 2016 suggest an annual growth rate of 13% is sales with total sales hitting an astounding $386B. A number of factors are driving this growth and include a growing population (shown below and taken from the Economist report), an aging population with longer life expectancy and a growing middle class able to afford to pay for quality health care.

The resulting projections for increases in health care spending, taken directly from the Economist report are shown below.

Of interest, the profitability index has been rising more slowly and in an erratic way.  This can be attributed to sporadic rises in wages and other costs.  Thus, sales volumes and cost savings will have to combine to maximize profits in Asia.
These observations can be used to explain the surge in antibiotic sales in Asia.  Shown below from IMS data kindly provided last year by Astra-Zeneca, are sales of antibiotics in the years 2006-2010 comparing Asia-Pacific with North America.  If you were a pharmaceutical company wanting to maximize opportunities for antibiotics, where would you place your bets? 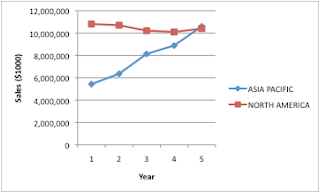 I believe that these trends will lead to an increase in the number of large pharmaceutical companies pursuing antibiotic R&D.  Evidence that this is already happening comes from the Bayer-Trius deal largely driven by Bayer’s Asia division, the recent re-entry of Sanofi-Aventis into the antibiotic R&D game and statements by large pharma executives like Mark Mallon from Astra-Zeneca as quoted in the Economist report.
The corollary to this is that if the FDA continues to make the development of antibiotics infeasible in the US, as I have been saying for a long time now, companies now have the option of developing their antibiotics under European aegis, ignoring the US market and looking to the East to sell their wares.  And this is exactly what will transpire.  You read it here first!