Who cares about pull incentives? 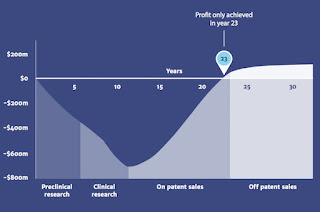 We do. But no one who actually invests in antibiotic R&D has these incentives high on their priority list or even on their radar screens. They are not yet real, they may never
come to fruition and they may be poorly devised such that they would stifle rather than stimulate investment.

This week I spoke with three really smart people on the front lines of antibiotic R&D; a CEO of a publicly held antibiotic biotech, a CEO of a privately held antibiotic biotech and an analyst who follows the space closely. I will keep all three anonymous at their request. It is a wonderful privilege to be able to speak with folks like these because you can learn so much from them.  All were unanimous in their responses to my questions.

1.     What is driving investment in the antibiotics space?
The biggest driver is a commercial one.  What are the chances of a successful launch? What is a realistic estimate for peak year sales? When will we achieve peak year sales? Recent antibiotic launches have been dismally disappointing. This lack of commercial success for recent antibiotics has had a chilling effect on mergers and acquisitions in the space. Nevertheless, investors are still willing to support antibiotic start-ups.  They believe that medical need will ultimately drive the market. They are still able to get meetings with large PhRMA. But if current conditions continue, investors will come to understand that antibiotics are not welcome in the pipeline of large PhRMA companies – and we will enter a down cycle of investing.  Some think we have already arrived at that point.

2.     What is the preferred exit strategy for a private investor?
Acquisition! A public market offering is acceptable to some. But the poor performance of recent antibiotic launches is clearly causing hesitation among the few large PhRMA companies still interested in antibiotics making acquisition less likely.

3.     What kind of product is most likely to lead investors to believe that an antibiotic can be commercially successful?
A product that can be readily used empirically is more attractive.  That is, most likely, a broad-spectrum antibiotic. A narrow spectrum, high priced product or even a broad-spectrum product that has been listed at a high price to encourage use in only resistant infections has not been successful. A broad-spectrum antibiotic that can be sold at a lower price and used empirically but is still active against key resistant pathogens may be the preferred drug at this point. Of course, this may not be best from a stewardship point of view – but there has always been tension between antibiotic stewardship and commercial opportunity for antibiotics. Such a product also has the advantage of a more straightforward development pathway (Tier A/B).

4.     How important are push incentives?
Non-dilutive funding has become an important consideration for investors.  Why?  Because it is real.  There have been a large number of such grants and contracts over the last 5-10 years.  Such grants decrease the investment required to bring a product to a stage where a buyer might be ready to purchase it. This, in turn, increases the potential for investors to achieve a reasonable return on their investment.

5.     What strategies do antibiotic companies need to adopt today?
They need to be ready to launch a product themselves and demonstrate that the product can be commercially successful.  This means raising funds to support phase 3 trials and the subsequent registration and launch of the product. That is, they need to raise $1-300 million. It could partially come from non-dilutive funding as has happened both with the Innovative Medicines Initiative in Europe and BARDA in the US. But investors will also have to kick in a substantial portion of this funding.  It also means that investors – especially private investors like VCs- will have to have a much longer term outlook than they are accustomed to having.

6.     Should small companies merge?
One of the CEOs suggested that mergers among small companies to provide a variety of products might result in a more attractive investment opportunity.  A stable of products decreases overall risk. It would also allow for a more efficient distribution of resources.

7.     Could pull incentives change this calculus?


Possibly. The pull incentive would have to allow for sales and commercial success. Both the transferable exclusivity voucher and a hybrid market entry reward model might meet these criteria. But until these incentives become a reality, investors will not even think about them.
Posted by David Shlaes at 11:19 AM