Antibiotic Approvals - Is the Glass Half Full?

Since the reboot of antibiotic development that the US Food and Drug Administration undertook in mid-2012, there has been a clear acceleration in the rate of approvals of new antibiotics.  The graph below shows FDA approvals of New Molecular Entities of antibiotics over time – and it speaks for itself. Clearly, even after the reboot, we are not reaching the rates of approval we saw during the 80s and 90s – the heyday of antibiotic discovery and development. But there seems to be a clear improvement. 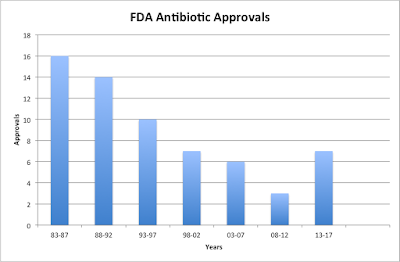 A close look at those approvals shows that two of the antibiotics approved in 2014 (dalbavancin and oritavancin) were holdovers discovered in the 90s that had previously been discontinued from development related to changing FDA regulations, to market considerations and to technical issues. Both are administered intravenously and target only Gram-positive pathogens. Nevertheless, the post-2012 approval rate remains encouraging. Will this continue?

I “borrowed” the analysis below from a public presentation by John Rex describing the DRIVE-AB recommendations for pull incentives. Here he analyzes the current pipeline focusing on resistant pathogens in terms of WHO priorities and the likelihood of approval of products currently in clinical trials. It looks like it is conceivable that today’s rate will continue over the next five years but that new antibiotics active against resistant strains of the gonococcus, Acinetobacter and Pseudomonas will remain rare for the foreseeable future. The forecast is much more favorable for antibiotics active against Enterobacteriaceae including those possessing extended spectrum B-lactamases and those active against Gram-positive pathogens. 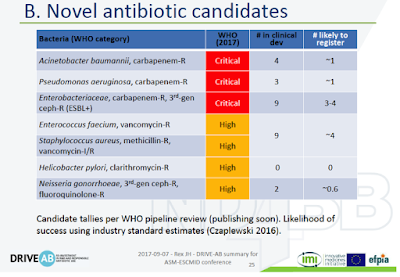 The WHO has concluded that this pipeline is insufficient to meet our needs over the next decade and it is difficult to argue with that.  Clearly, we need to stimulate additional research – hence the need for both push and pull incentives.
Posted by David Shlaes at 5:23 AM