I just returned from two days of DRIVE AB meetings in Amsterdam.  I am so excited that I couldn’t wait to get something in writing for the blog. 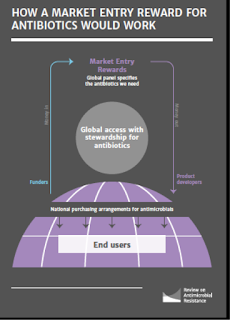 Two weeks ago, the O’Neill Commission (officially the Antimicrobial Resistance Review) released its final report.  If you haven’t read it – do it now! The report makes a number of very specific, key recommendations all of which make common sense.  They all fall under two general rubrics -
1.     Reduce the demand for antibiotics.
2.     Increase the supply of new antimicrobials active against resistant microorganisms.
These two are clearly conflicting – the paradox of the antibiotic market in a nutshell.  A new antibiotic hits the market and physicians don’t want to use it for fear of selecting for resistance too quickly. But this is what we must somehow achieve.

DRIVE AB is an effort to combat antibiotic resistance funded by the European Commission, the Innovative Medicines Initiative and EFPIA, the European version of PHRMA in the US.  DRIVE AB is founded on three principles – Access, Sustainability and Innovation. You can immediately see the similarity between the DRIVE AB goals and the O’Neill Commission report.  I look at DRIVE AB as the group that will provide more specific recommendations to various national and supranational authorities on how to implement the recommendations of the O’Neill Commission.

To me, the most exciting aspect of the DRIVE AB effort revolves around providing post-market incentives to pull companies into antibiotic R&D –a key recommendation of the O’Neill Commission.  Some have termed this de-linking with the idea that these incentive payments should alleviate the marketing pressure on the company to increase sales volumes and therefore to provoke a more rapid emergence of resistance. A significant upfront payment would address this need and resolve the paradox.

Again – according to the O’Neill Commission - The reward would be given only based on societal priorities shaped by key medical needs. The CDC list of key resistance threats is a good starting point for these priorities. Payments should be free from political risk. The size of the reward should be linked to the value of the product to society (or to a given country). The payment would come soon after regulatory approval, but need not come all at once. Control for manufacturing, distribution, post-market research all should remain in the hands of the developer.

The DRIVE AB group discussed several models for such post-market rewards of which I would like to highlight just two. The first is called an insurance type reward. (See Rex & Outterson) John Rex’s favourite way to explain this is to compare the payment required to our need for fire extinguishers and for firemen. We buy the extinguishers and place them strategically in our homes and businesses and we pay the salaries of our firemen and firewomen even though, happily, most of us never actually have a fire. Paying for an antibiotic that we don’t actually need today, but that we might desperately need tomorrow is similar – its insurance. In the example we discussed, a collar and cap model is used for insurance payments. A government of payer provides a developer with an annual payment up to some specific volume of courses of therapy. If this volume is exceeded (the collar), the payer must provide additional payments on a per course basis.  This volume though, is capped.  If the cap volume is exceeded, the payer would pay some discounted price for additional courses of therapy. From my understanding, some variation of this is likely to occur in a couple of EU countries as soon as this fall for antibiotics recently approved in Europe.


The model I personally prefer is similar to the insurance license model but where the upfront payment is on the order of say $1B given over the first 3-4 years post-approval. But where the developer is still allowed to sell units at some capped price.  This price would be enough to encourage good stewardship at the level of the user and the company would still have to abide by their good stewardship contract with the payer. I envision that the cap would increase after the first 3-4 years such that by the end of the exclusivity period, all sales would be based on whatever price the developer was charging.  This provides several advantages.  It keeps the developer’s skin in the game – its motivating.  It provides for a potential upside beyond the initial payment – also very motivating. And it would encourage generic manufacturers to enter the market after the period of exclusivity has expired.  The key would be to make sure that principles of stewardship and responsible end user education are maintained while actual selling the product.

The reality is that for any innovative product education will be required.  That would probably occur via some sort of medical liaison group from the developer, but would not involve “sales” representatives.

Our discussion made clear that no one model would work for any one product for all regions and no one model would fit all products for any region.  We need a choice of different post-market incentives such that various regions can choose the one that best suits their needs.

One exciting result of these incentives is the virtuous cycle. Large pharmaceutical companies like Pfizer and J&J might be motivated enough to get back into antibiotic R&D. This means that there would be more private capital to invest in academic and biotech R&D – completing a virtuous cycle leading to an even more robust antibiotic pipeline for the future.

As John Rex noted several times during the meeting – such a meeting could not have occurred even one or two years ago.  Yet here we are – at the beginning of what could be a new world.
Posted by David Shlaes at 11:50 AM