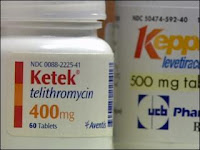 An article just published in the Canadian Medical Association Journal suggests that, at least among patients older than 65 years of age, serious liver toxicity occurs at a rate of 7.98-8.62 per 100,000 patients treated with levofloxacin and moxifloxacin respectively compared with 6.44 per 100,000 for cefuroxime, a B-lactam usually considered to be safe.  But clarithromycin, a macrolide,  a class known to be associated with rare toxic liver reactions, had a rate of 3.95 per 100,000 patients treated in this large Canadian study.  Of course these rates are low overall – about 10 fold lower than the rates of fatal aplastic anemia we used to see with chloramphenicol (for those of you who remember back that far).

But more fascinating to me is that the rates of serious liver toxicity associated with these fluoroquinolones are all higher by several fold than the rate estimated for  telithromycin (Ketek) liver toxicity.  There the rates were calculated (this link requires a subscription or payment) to be about .5-1 in 100,00 patients treated.   You remember Ketek – the scandal that resulted in the FDA virtually halting antibiotic development in the US (at least in most indications).  I should note that the methods used in the fluoroquinolone study and that used for the FDA studies are not the same.  Nevertheless, these data support the contention that Ketek was no more toxic than many other antibiotics already approved for indications like sinusitis, bronchitis and otitis.  But approval for use in these indications was withdrawn for Ketek – but not for any of the generic antibiotics or even any of the other branded antibiotics like levofloxacin even though some were as toxic as Ketek.  What will now happen to levofloxacin and moxifloxacin?  My guess – nothing – not even relabeling.  Ketek was just in the wrong place at the wrong time and served as a focal point for congressional anger and frustration with what they apparently saw as a flawed antibiotic development process in the US.  Of course, what this led us to is a paralyzed development process for antibiotics in the US that the FDA now says has to be entirely rebooted.  I think Ketek was good in a way for making us examine some of the principles upon which our process is based.  But Ketek also engendered action on the part of regulators without consideration for the consequences.  We are all now paying for these decisions in antibiotic R&D that has shrunk and continues to shrink based on PhRMA’s correct view of the increased regulatory risk (in the US) in spite of rising levels of resistance and increasing numbers of untreatable infections in the US and abroad.  This is a price that we will continue to pay with interest for several years.

Should we withdraw our withdrawal of Ketek?
Posted by David Shlaes at 1:16 PM