First, I have to apologize for being so long in contributing a blog since my last one.  I have a couple of excuses.  I’ve been busy.  The antibiotic news lately has been scant and much of it I don’t even understand as noted below.
The GAIN act passed both the senate and the house in the US over the past couple of weeks. It was attached to the PDUFA reauthorization legislation that allows the FDA to continue to charge companies more and more money to carry out efficient reviews of New Drug Applications among other tasks. PDUFA was highly sought by both FDA and the pharmaceutical industry – so – win-win.  GAIN, however, to my eyes, is more controversial.  The main piece of GAIN that has attracted attention is the “incentive” for industry to continue or restart antibiotic R&D by extending the patent exclusivity of antibiotics active against resistant pathogens.  But this incentive, for the most part, isn’t. The extension seems designed only to help those companies, mainly biotech and perhaps some academic groups, who are developing drugs with very short patent lives.  Otherwise, the benefit of the exclusivity extension is completely gone when discounted for inflation over the years of exclusivity of most newly marketed antibiotics.  So – as an incentive for large pharmaceutical companies – I just don’t get it. And we need the large pharmaceutical companies to get into the game so that they can help fund biotech and academia so that phase III trials can be accomplished.  Luckily, the markets may do that for us – thus GAIN becomes, as far as incentives go, a very limited step forward.

GAIN might accomplish two things.  It allows congress folks like Dick Blumenthal to crow about how they are helping provide needed new antibiotics for Americans without spending government money.  GAIN also has a vague clause that states that the FDA has to provide new guidance for antibiotic development.  This might actually provide the FDA cover from congress itself as it seeks new, more rapid but also more risky development pathways for antibiotics that target unmet medical needs like activity against superbugs. 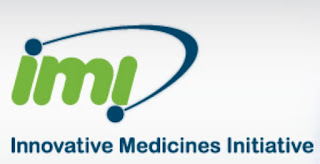 Logo (Photo credit: Wikipedia)
In another bit of news last week, the Innovative Medicines Initiative announced a new public private partnership to foster R&D for new antibiotics.  They are targeting the development of new clinical trial designs for antibiotics for unmet medical needs and new discovery pathways for antibiotics active against Gram-negative pathogens.  This is all well and good and we all welcome this effort.  But, as always, the devil is in the details.   And in spite of trying to carefully study and understand the details as presented in all the documents on the IMI website, I find I am completely confused.  It looks like all the large funding blocks have already been committed to the two largest European PhARMA (EFPIA) contributors, GSK and AZ. So, if another company wanted sufficient funding to support phase III trials, I am not sure it would be there in any case.  It also looks like the partnership is designed to partner companies or academics with EFPIA members and that opportunities for R&D outside the EFPIA group is limited. It looks like I am not the only one with questions on this front. Finally, it looks like the research awards will be similar to those done within the context of the European Framework grants – NO!  NOT THAT!!!  Anything but that!!!
So – consider this a plea for clarity.  Can someone from IMI explain all this?
In another piece of news closer to my heart, Nabriva announced a deal with Forest. Hopefully, their novel IV/oral Gram-positive and RTI compound active against resistant pathogens will ultimately see the light of day.