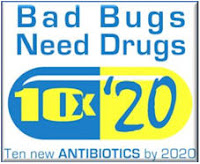 In my last blog I reviewed a number of committees and taskforces on antibiotics and antibiotic resistance in which I have participated in one way or another.  But one that I left out is the Antimicrobial Availability Taskforce (AATF) of the Infectious Diseases Society of America (IDSA).  The IDSA (and its sister societies) is probably the most prestigious and well-respected group in the world when it comes to infectious diseases.  A number of years ago, they began to take a keen interest in the declining antibiotic pipeline, its potentially catastrophic implications for patients and physicians and the role of the US as a society and our regulatory agency, the FDA, in this emerging public health threat.  In response to this, the IDSA put together this task force which included a number of experts from a variety of different disciplines from antibiotic discovery scientists to practicing clinicians to clinical trial and regulatory experts. They asked me to participate as well.  At the time, I was becoming frustrated with the Forum on Emerging Infections of the Institute of Medicine (IOM) because I felt that in spite of all our work and our various publications, we were not able to push requisite changes at any level.  IDSA is able to lobby congress while the IOM cannot. I immediately left the Forum of the IOM and joined the IDSA effort.  The immediate result of this effort was the now well-known white paper, Bad Bugs, No Drugs that was released in 2004.  I am very proud of this paper and the Society for bringing this issue into the public eye with greater force than anyone previously.
With this white paper, the IDSA embarked on a campaign to bring about the changes necessary to improve our pipeline.  They carefully update their pipeline assessment and note their progress every year.  Since 2004, they have worked hard on all relevant fronts in this battle.  They push for antimicrobial stewardship in every health care setting, they have an initiative on limiting unnecessary use of antibiotics in agriculture, they provide information on resistance in the US, and they have initiated a campaign they call 10 x 20.  The 10x20 campaign challenges the world to come up with 10 new antibiotics active against resistant bacteria by 2020.  (I actually believe that we will achieve this goal, although probably not in the US unless something drastically changes at FDA).
The AATF of the IDSA has really focused on two key areas to achieve their goal.  One is regulatory reform at the FDA and the other is incentives for industry through legislative efforts. And I believe they have been effective on both fronts.  The FDA is slowly beginning to see that releasing guidance documents requiring infeasible designs only takes us backwards.  The IDSA has been essential in getting the FDA as far as they have come – but we are still a long way from where we need to be.  They have accomplished this through a series of public workshops with FDA and with many meetings both in person and over the telephone.  They have also been instrumental in participating and leading the Foundation for the National Institute of Health Biomarkers Consortium effort to help the FDA at least define feasible endpoints for their new trial designs. Once again – the question is why are we stuck with these endpoints anyway and why can’t we define feasible non-inferiority margins for infectious disease indications.
On the incentives side, I think the IDSA can take much credit for the GAIN act that is shuffling through congress.  The problem is that I don’t think the GAIN act will actually incentivize the companies that we need to target with incentives.  And, personally, I am now questioning whether the markets in emerging economies will not provide enough of an incentive without government intervention.  Nevertheless, that the IDSA has come as far as they have is an accomplishment that we all have to recognize with gratitude.
So, even though I don’t always (infrequently?) agree with the specific directions the IDSA takes, and even though I remain frustrated with the amount of time this is all taking, the IDSA deserves many kudos and much recognition for what they are doing.  My advice to the IDSA on the regulatory front – where I think they can make the most impact – is – get aggressive!  No more Mr/Ms nice guy!
Posted by David Shlaes at 9:59 AM