The perfect storm hitting the antibiotics R&D has intensified.  According to a recent report by Reuters, the return on investment has fallen by a startling 30% at the world’s 12 largest pharmaceutical companies. The cost of developing a drug through to market has risen from $800 million several years ago to $1.05 billion today.  This rise is mostly due to the increased number of failures – especially late stage failures.  The increase in late stage failures is related in large part to the high regulatory hurdles being encountered across the various therapeutic areas where the industry works. To address this, companies have pared their phase III portfolios from an average of 23 to 18 compounds – a 28% decrease. At the same time, the commercial value of products entering late stage development has increased. Thus, the portfolio prioritization process has narrowed late stage products to those with higher commercial values in most companies. Additional responses from the industry include an insistence on increasing returns on investment.  This is likely to generate additional merger and acquisition activity and further pressure on the portfolio optimization process.  It is likely that this optimization process will place further pressure on antibiotic R&D.
At the same time, a recent report from the European CDC noting a 56% increase in reports of carbapenem resistant Klebsiella pneumoniae between 2005 and 2010.

Resistance to third-generation cephalosporins continues to increase to very high levels throughout the European Community. 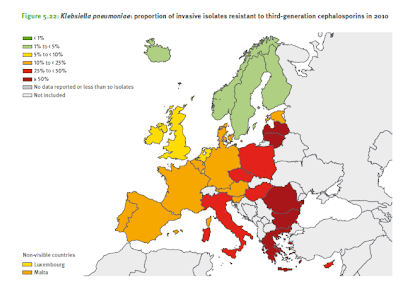 The European Union has responded to the crisis of antibiotic resistance with a fairly watered down action plan to member nations. Of the 12 action items in this plan, one is dedicated to the discovery and development of new antimicrobials – shown below.  It calls for the establishment of a public-private partnership under the auspices of the Innovative Medicines Initiative to direct and coordinate academic, non-profit and industry partnerships for this purpose.  But, in the realm of antibiotics, these efforts, so far, have failed to bear fruit with most recent late stage products coming from either large pharmaceutical companies or biotech. Having participated in two framework grants on the industry side, I can only hope that the process for Framework 7 and its successors will be more palatable than that for Frameworks 5 and 6.  As almost a footnote, the action plan calls for implementing procedures for fast-tracking antibiotics against resistant pathogens.  But, as the plan essentially says, these procedural pathways already exist.  The question is how to implement them. The action plan, appropriately in the case of Europe, leaves this to the regulators.  But some more explicit directions would have been helpful.  For example, there should have been a directive to establish feasible pathways for superiority trials leading to early conditional approval. A directive to maintain feasible non-inferiority trial pathways would have also been a welcome addition. While I believe the European regulators already understand this, a clear mandate from the EU would still have been helpful to those of us who want to pursue innovative trial designs for antibiotic development and for the regulators themselves as they try and implement such designs in guidance to sponsors. 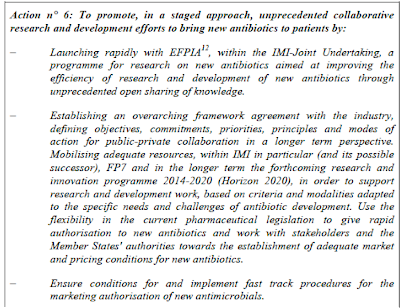 While the Perfect Storm intensifies, both the US and EU still fail to address the key issues.  Feasible regulatory pathways forward are the first giant step forward. I can only hope that the EMA will succeed in maintaining feasible procedures and promulgating the new,  innovative and feasible guidance that I know they seek for the development of new antibiotics.
Posted by David Shlaes at 9:16 AM