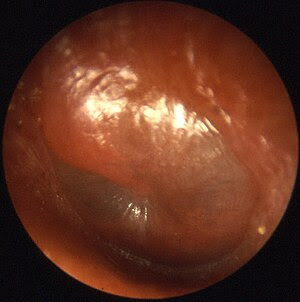 Image via Wikipedia
A recent article appeared in the Journal of the American Medical Association regarding the treatment of infections of the middle ear of children (acute otitis media or AOM).  The article caused a stir because the authors concluded that antibiotics have a limited benefit, that there was little difference among antibiotics, and that antibiotics also had side effects.  They seemed to indicate that expectant therapy would be a reasonable recommendation for dealing with these ear infections.   While I don’t argue with this conclusion, I think that it would be good to be clear on exactly which patients we are talking about and at what time we decide whether patients have benefited or not.
First, the article in JAMA was a meta-analysis.  That is, it just reviewed results from previously published studies and kind of pooled the data.  For the antibiotic therapy of AOM, they chose studies that looked at clinical response to treatment after 14 days.  At 14 days, they showed that amoxicillin had a success rate of about 73% compared with 60% for placebo – a 13% treatment effect.  The antibiotics also had side effects like rash and diarrhea.  No other time points were examined.  A variety of antibiotics had similar results at 2 weeks.  Many news services picked up on these results to indicate that the use of antibiotics to treat ear infections is usually unnecessary and could represent an abuse of antibiotics that might, in turn, select for antibiotic resistance.
The meta-analysis published in JAMA was picked up by a number of news services including The Boston Globe, CNN, and others. They all echoed the authors’ conclusions that antibiotic treatment is of only modest benefit and is associated with side effects.
The studies that were reviewed did not use a standardized method of diagnosis of middle ear infection. One thing we have learned over the years is that a definitive diagnosis is important and can be easily made simply by looking at the eardrum through an otoscope, seeing that the drum is red, swollen, and immobile when you blow a little air on it. That has a 95% chance of correctly diagnosing a bacterial infection of the middle ear.  Thus, if some patients who did not actually have bacterial otitis media were admitted to the studies, the antibiotic effect would be lessened.
On the other hand, the researchers who recently reported their results on clintrials.gov as I noted in my previous blog on otitis, carefully documented the presence of middle ear infection in each case.  They also looked at responses while patients were still on therapy (within 72 hours) and at 7 day endpoints for their trial. In the results from their study, which should probably be considered the definitive study, 23% of placebo treated patients were clinical failures compared to 3% of antibiotic treated subjects at the on therapy visit (within 72 hours).   16% of antibiotic-treated patients and 51% of placebo patients were failures at end of therapy (7 days).  These data establish a treatment effect of 11% during the first 72 hours and 35% during the 7 days of therapy.  This treatment effect being more than twice what was seen in the meta-analysis published in JAMA might be explained by the heterogeneity in the population studied and the 14 day endpoint used by these studies.
To conclude that antibiotics do not work well and are not justified in light of these most recent data seems premature.