One of the major arguments against the use of superiority trials for antibiotics goes as follows. Once a new antibiotic has been shown to be superior to a comparator, the new drug must then become the comparator for all subsequent trials. There are probably two assumptions that underlie this argument. There is an ethical concern about treating patients in a trial where the comparator has been shown not to be the “best available therapy.” The other assumption here, I think, is that the world of physicians will immediately turn to using the superior drug and therefore that the new superior drug will become the “standard of care”.  But, in fact, this last assumption appears to be completely wrong! 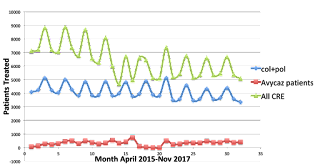 The figure shows use of ceftazidime-avibactam from its launch in April of 2015 until November 2017 compared to the use of colistin and polymyxin for carbapenem-resistant infections. Clearly, the superior antibiotic is not being used clinically.  There are probably two major reasons for this behavior. Ceftazidime-avibactam is very expensive – around $8000 for a course of therapy – while colistin/polymyxin is cheap. The other reason is that in spite of being launched in 2015, most automated susceptibility testing devices used in hospitals are still unable to test ceftazidime-avibactam (don’t get me started!).

Based on these data, there is no reason why a second or third antibiotic cannot be compared to colistin/polymyxin-containing regimens in a superiority-design trial since these regimens continue to be “standard of care” in spite of data suggesting that they shouldn’t be. If physicians see no ethical concern in treating patients with an inferior drug in their everyday practice, should we force them into another behavior in the setting of a clinical trial?

Personally, I think the ethics of continued use of colistin/polymyxin for most CRE infections is highly questionable. But if these drugs continue to be standard of care – then using them as comparators seems reasonable.
Posted by David Shlaes at 12:58 PM