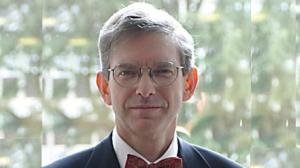 My source of information for this blog comes from John Rex who has been instrumental in the thinking leading to these considerations.  I did not participate in any of the relevant meetings. We don’t agree on everything...

An email to the FDA (Ed Cox) inquiring about this has gone unanswered.

By way of context, there have been a number of conversations over recent years about the potential value of a clinical network for antibacterial development. This idea was discussed at some length, for example, during a July 2014 NIH-NIAID-FDA workshop where examples of this work in other areas (e.g., oncology) were discussed.

But, the challenge of designing trials focused on MDR and XDR pathogens are formidable and recent efforts (e.g Achaogen) have shown us how hard this can be. Indeed, enrolling patients with MDR and XDR infections is hard for lots of good reasons – indeed, we want these infections to be rare.

But, we also know that infection prevention will never be perfect and we definitely need new drugs.

As a strategy for circumventing this problem, a recent Request for Information from BARDA suggests a very different approach. In brief, the RFI proposes creation of a network that is focused on pathogens that are susceptible to least one reasonably available drug.

Here’s where John Rex comes in. Along with his several of his colleagues, he’s proposed a new acronym for us to consider along with the well-known acronyms MDR and XDR:

Importantly, UDR is not the same as wild-type. Rather, UDR speaks to the ease of selection of therapy and by extension, ease of selection of a comparator for a global trial:
·      UDR: Many easy choices. Easy to choose a single global comparator.
·      MDR: Harder – may need 2nd-line drug. Single comparator is harder
·      XDR: Needs a difficult or unusual drug. Comparator must be ad hoc.

The core notion that a network could be built out of studies of UDR isolates. Indeed, John points out, the BARDA RFI proposes creation of 3 networks designed to run for up to 10 years. There would be one network for each of the three major Gram-negative infections (cUTI, cIAI, and HABP/VABP). The network would be constantly running clinical trial that would permit investigational drugs to rotate in and out efficiently. A picture is really helpful … here’s the graphic from the BARDA RFI. 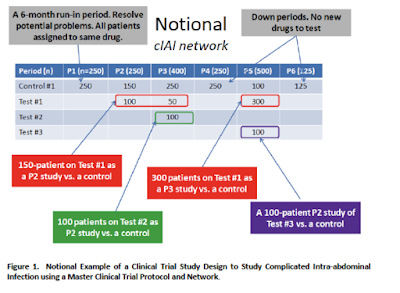 Imagine Control #1 as a carbapenem and you begin to see how the UDR idea works — basically the network could be established at a collection of hospitals and most patients with cIAI would (probably) be eligible. Indeed, patients known to be infected with something NOT susceptible to a carbapenem would be ineligible.

The sponsor is still free to pursue MDR or XDR pathogens in parallel studies, but putting a drug through this network is a low-risk way to get a good clean trial run against a high-end comparator and hence build a solid foundation for registration.

The success of this strategy depends also, in part, on being able to make a strong PK/PD (pharmacokinetic/pharmacodynamic) argument that if the drug works against UDR organisms, it will also work against highly resistant ones IF the resistant ones are “susceptible” to the new drug.

That means that the dose used must achieve adequate systemic levels of the drug over an adequate time period such that the infection can be cleared even if caused by organisms resistant to many other antibiotics.  For this to occur, the growth of the organism in question must be inhibited by a concentration of the new antibiotic previously shown in test tubes (MICs) to indicate that the antibiotic will work in systemic therapy.

Both regulatory authorities, I am told by John, support the UDR approach to approving drugs.  The label might read – “shown to be efficacious in the treatment of cUTI (for e.g.) due to susceptible strains of X,Y and Z bacteria.” And this makes wonderful sense and shows that the FDA in particular agrees that PK/PD arguments are valid.

Companies, though, are concerned that even if the FDA and EMA will approve new antibiotics under these circumstances, physicians still want to see controlled trial data showing convincing activity against these resistant pathogens.  The “community” apparently is not ready for the PK/PD argument yet. Or at least, that is the concern of some companies.  My view is that this is a matter of education.  PK/PD rules! So I completely support the UDR stance.

Notice that all of the above considerations work for non-inferiority trials of relatively broad spectrum agents. For rare diseases, rare pathogens or pathogen specific antibiotics, these designs will probably not be feasible. But – I believe that there are other ways to skin this cat. For further discussion with John see the next blog.