Education vs. Advertising in the Pharmaceutical Industry

A series appearing in the New York Times this week on the explosion in prescriptions for Attention Deficit Hyperactivity Disorder (ADHD) that is occurring in the background of an exponential increase in diagnoses of this disease in both children and adults and aggressive direct to consumer marketing campaigns for medications by the pharma companies. Of course, ADHD has nothing to do directly with antibiotics and infectious disease per se but direct to consumer advertising is a topic that touches all areas of medicine.

Sometimes, believe it or not, when a pharmaceutical company discovers something truly innovative where no therapy or no vaccine has existed for the disease before, in order to provide appropriate information for physicians, education about the disease and the product are required.  I can give you a great example from my own experience at Wyeth.

Invasive disease caused by Streptococcus pneumoniae is not common in children – but is dangerous and costs society a good deal of money every year since the morbidity and mortality robs society and the children themselves of years of productive life. Prior to the introduction of Wyeth’s first Prevnar vaccine back in 2000, the World Health Organization calculated that over 5 million children under the age of 5 years died every year of this infection. Many more suffered serious sequelae from these infections. Five million seems like a big number, but back in the 1990s, Wyeth carried out a survey of pediatricians to ask how many cases of invasive infection caused by S. pneumoniae they saw every year.  The answer was one or two or less. Wyeth asked whether the physicians thought that vaccinating children against this disease would be worthwhile – only about 2% thought that such vaccination should be routine in the United States. Wyeth recognized, though, that the epidemiology of the disease and potential cost savings to the healthcare budget even in the US would be substantial.  They also recognized that death and suffering could be prevented for many thousands of young children if such a vaccine were safe and effective and were widely administered. Wyeth set out to convince the world that this was true. 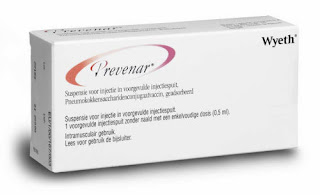 To carry out their education campaign, Wyeth partnered with the Centers for Disease Control in the US, the World Health Organization, with pediatric infections diseases specialists and others.  They carried out epidemiological studies showing the incidence of disease in the US and around the world.  They sponsored presentations at pediatric and infectious diseases meetings. Prior to the launch of Prevnar in 2000, something like 70% of pediatricians thought that routine vaccination against invasive pneumococcal disease was a good idea. The advisory committee for immunization practices of the CDC recommended that Prevnar be given to all children in the US. Since its launch, it is estimated that there was a decline of over 90% in the disease caused by pneumococcal strains included within the vaccine.  Because some pathogenic strains were not included within the vaccine, Pfizer, the current manufacturer of the vaccine, has added a number of strains.  This allows the inclusion of less common strains causing infection in children, as well as more common strains causing infection in adults.

The story of the conjugated pneumococcal vaccines has been one of the great success stories of the last century.  Without a pharma-driven educational campaign to increase physician awareness of the problem of pneuomoccal disease, I’m not sure that the success would have been as rapid or as dramatic as it was.

One could imagine that in order to encourage parents to comply with the CDC’s recommendation to obtain this vaccination of their children, some education would be required.  If pharma collaborated in sponsoring such an educational campaign – I don’t see anything wrong with that.  But I agree with some of the comments in the New York Times indicating that there is a fine line between education and outright marketing and that the latter is less beneficial at times than the former.