Dr. Rex is VP and Global Head of Infection Development at AstraZeneca Pharmaceuticals; a Non-Executive Director at F2G, Limited; and an Adjunct Professor of Medicine at the University of Texas Medical School-Houston.

PK-PD underpins both our development programs and interpretive breakpoints

On 17 Oct 2013, the FDA’s Anti-Infective Drugs Advisory Committee (AIDAC) met to discuss thechallenge of setting and updating interpretive breakpoints. For those new to the area, interpretive breakpoints are the rules used to provide predictive categories of Susceptible, Intermediate, or Resistant (S, I, and R) that give health care providers a quick guide to possible antibiotic choices.

On the surface, this sounds simple – does the drug inhibit the bacteria or not? But, the problem becomes complex very quickly. First, the idea of “the drug” has to be translated into “the concentration of the drug at the relevant body site when the patient is given a specific dosage regimen.” Second, the drug’s concentration in patients rises and falls with dosing whereas testing in the laboratory can only for practical purposes be done at fixed drug concentrations. Third, experience has shown that infections differ in terms of the intensity of drug effect needed. Finally, not at all body sites are the same in terms of drug penetration!

Despite this complexity it has been possible to develop breakpoints for most bug-drug combinations that offer a good aid to drug selection. But, the challenge that has emerged is that new information has emerged over the past 20 years that has shown us ways in which some of our breakpoints are suboptimal. Much of this insight flows from the science of PK-PD (pharmacokinetics and pharmacodynamics). We now have a clear understanding of how the shape of the drug exposure curve relates to effect of the bug and how to use preclinical in vitro and in vivo models to predict the required shape for clinical effect in man. We also have an understanding of ways to model the shape of the curve that deal with the fact that different individuals will have slightly different curves – we all clear drugs from our body at a different rate and have different volumes of distribution.

In addition, new insights into best ways to do the in vitro susceptibility test and the evolution of new mechanisms of resistance may have an impact on our view of the most appropriate breakpoint. Finally, some drugs have a sufficiently broad range of indicated dosages that a single set of breakpoints doesn’t seem appropriate, especially give rising rates of resistance and our limited new drug pipeline.

And finally, there was a critical need to address this because of a problem that has come out of the woodwork as we’ve begun to implement the streamlined development programs outlined by the 7 Nov 2013 release of the final version of the EMA addendum on antibacterial development and the July 2013 release of the FDA’s Unmet Need guidance.

These new approaches to development can collectively be described under the rubric of the tiered development approach that my colleagues and I recently described in our paper in The Lancet Infectious Diseases and will in most cases result in initial registration based on much more focused datasets than in the past. 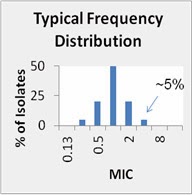 But (and here’s the problem), small datasets almost invariably mean that isolates with the highest MIC in a drug’s treatable range will NOT be seen in the course of at least the initial development program. To understand this, see the figure at right showing the typical frequency distribution of MICs for wild-type (non-resistant) isolates of a any given organism vs. any given drug. Although the midpoint of the distribution may differ across various bug-drug combinations, the 4- or 5-log2 distribution of MICs is essentially universally seen and isolates with the highest MIC are uncommon.

Modern development programs will always focus on providing enough drug to treat even the highest MIC isolates. However, breakpoint setting has in the past required capture of at least one case of patient infected with the highest MIC isolate. Absent such experience, there has been a tendency to set breakpoints such the higher MIC isolates are categorized as either Resistant (R) or even more confusingly as Non-Susceptible (NS).

Whether labeled as R or NS, the practical consequence is that the drug’s use for these isolates will be effectively curtailed in practice. This is effectively an illogical Catch-22 — if we believe in PK-PD for support of our trial programs and registration, we should also trust it to help us set breakpoints.

In recognition of all of these challenges, the FDA convened this AIDAC and asked the committee to comment on two hypothetical cases constructed by the FDA to represent elements of this problem.

The outcome? Although the actual votes suggest a split views, it is important (as with all ACs) to listen not to the votes but rather to the logic behind them. Despite a range of Yes and No votes, there was actually near complete agreement that PK-PD really should be used to augment our approach to setting breakpoints. Presentations from multiple societies were supportive and the discussion by Advisory Committee really focused on the details of how this should be done rather than on whether it should be done.

A lot of the debate focused on the question of how finely we could adjust the guidance. Is it, for example, possible to have breakpoints that depend not just on the bug and drug, but also the site of infection? The committee on the whole felt this was too complicated to manage, especially as the laboratory can’t always infer the site of infection from the its knowledge of specimen (e.g., an organism found in the blood could relate to many different actual sites of infection). But, the AC did support the idea that PK (especially PK from patients) could be the basis for recommending dosage adjustments that would permit a single set of breakpoints to be applied across all indications.

All of this is, in my view, a really encouraging demonstration of how we are using science-based logic to enable the development of much-needed and potentially life-saving antibiotics prior to future epidemics of highly resistant bacteria.