The View from Asia 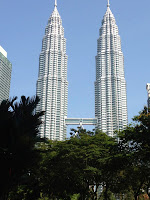 I have just wrapped up three days at the ISAAR (International Symposium on Antimicrobial Agents and Resistance) where I delivered one of the plenary lectures.  But I am writing to tell you, dear readers, that no matter how much you read on resistance in Asia – there is nothing like being here and speaking to physicians and microbiologist about conditions on the ground.  NDM-1 is the most common mechanism of carbapenem resistance among E. coli and Klebsiella in Malaysia.  You remember NDM-1 – the superbug resistant to just about everything (with the occasional exception of tigecycline and colistin) that arrived in Europe from India a few years ago.  This is also the superbug that is found in the water in New Delhi and other parts of India and Pakistan. Well its here in other parts of Southeast Asia with a vengeance. In both Malaysia and Sri Lanka over 50% of community acquired urinary tract infection caused by E. coli is caused by strains carrying ESBLs and these are frequently so resistant that oral therapy for the infection is not possible.  So the patients have to be treated intramuscularly or intravenously either as outpatients or in the hospital (as opposed to staying home and taking pills).

(Parenthetically, I have a plea for all who do surveillance for resistance – including the CDC in the US.  Please provide actual patient based incidence rates – resistant infections per discharge from the hospital per unit time).

I learned that 5% of the global pharmaceutical market is made up of counterfeits.  80% of the copies are made in Asia and over 40% of their use occurs in Asia. Most of the counterfeits contain no active ingredient.  Some contain lower amounts of the active ingredient – great for selecting resistance.  Some contain another product altogether – at least they won’t select for resistance.  Some of these counterfeits are actually sold in Europe and the US.

Apparently in some Asian countries you can get carbapenems, our last line against resistant Gram negatives, over the counter without a prescription. Here in Asia they are talking about actually requiring prescriptions for antibiotics.  They are thinking about requiring pharmacies to comply with this policy.  They are considering new labeling laws for antibiotics to prevent pharmacies from selling them over the counter.  But will these new laws and policies actually be enforced?  By whom?  Will corruption undermine these efforts?

So, while antibiotic resistance is a clear public health threat in Europe and the US, it looks like it is already a crisis here in Asia.  Our pipeline, such as it is, can’t mature too quickly for these Asian countries.  But unless we do something about how antibiotics are manufactured, branded and dispensed here, our pipeline will go up in smoke as soon as it hits the streets.