Rebooting Pneumonia at the FDA 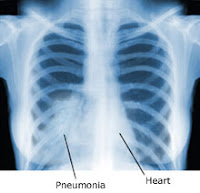 I was recently invited to participate in another meeting with the FDA at the Brookings Institution.  At the last meeting (summarized in a previous blog) Janet Woodcock made the extraordinary admission that the FDA would have to reboot in order to get antibiotic development out of the cellar in the US.  Helen Boucher pointed out that this reboot would have to encompass all aspects of anti-infective development – both the traditional development pathways where FDA guidance has made development infeasible as well as identifying new pathways forward to address areas of key unmet needs for new antibiotics. Both Janet and Helen are right!  I am hoping that this reboot will be a major topic of discussion at the upcoming meeting.

With that in mind, I have recently been considering what a reboot of the guidance for community acquired pneumonia trials could look like.  Here are my thoughts.

First, rather than jumping into endpoints like symptomatic response at day 4 as the FNIH and FDA have suggested, lets step back.  The justification for this entire step is to align modern trials with 80-year-old placebo-controlled trials to justify the NI margin.  Of course, even with a staggering 40% treatment effect, we end up with a margin of just 10% - how did that happen?  FDA magical discounting – that’s how.  But the clinically relevant endpoint is cure at test of cure – when the patient is sent home needing no further therapy for their pneumonia.  That’s the endpoint that patients and physicians care about – not whether they are feeling better on day 4 or not.  What are the data that these two endpoints, for any given patient, are well aligned?  Lets look at a pharmacometric analysis of the treatment of pneumonia in patients stratified by PORT score and determine the treatment effect in a modern context.

Then there is the issue of prior antibiotics.  The FDA says none. This is based on the famous daptomycin trial.  Daptomycin failed in pneumonia because it is inactivated by surfactant.  Prior antibiotics masked, but did not completely hide, the inferiority of daptomycin to ceftriaxone in these trials.  The FDA is putting all their eggs in the daptomycin basket with no confirmatory data.  In fact, the data from the ceftaroline trials might argue that patients with getting prior antibiotics are sicker and do less well overall than those not receiving them.

But prohibiting all prior antibiotics makes trials potentially unethical – how can you delay antibiotics for very sick patients when you know this might increase their risk of mortality? It also makes it impossible to enroll American patients in trials – but these are the very patients the FDA wants us to study. 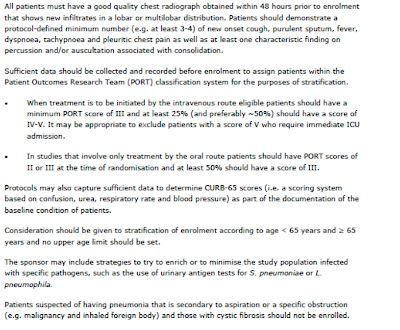 The primary endpoint is clinical outcome at test of cure.  The NI margin is 10% for the ITT population. One could add the identical endpoint for the microbiologically documented population with an NI margin of 15% with the population pooled over two trials as has been recently suggested by the FDA.

A secondary endpoint could be the clinical outcome in those patients not receiving prior antibiotics with an NI margin of 15%.

Exploratory endpoints could include –

Examine the difference in clinical outcome both at TOC and at the early 4 day endpoint between no prior and prior abx – both in control and test arms.
Compare the TOC endpoint vs. FNIH early endpoint for within patient and overall consistency.
These outcomes can be explored within the ITT and the microbiological documented populations.

This proposal recognizes the lack of clinical relevance for the early endpoints in community acquired pneumonia.  It also deals with the infeasibility of prohibiting all prior antibiotics while exploring the effects of prior antibiotics on non-inferiority studies in this indication.  The proposal allows for the development of oral-only antibiotics by allowing the study of less severely ill patients for those drugs. Currently, the development of antibiotics available only by the oral route is not possible at the FDA.   And the proposal harmonizes the EMA and FDA guidances overall.

I hope we will be able to discuss this proposal and others with the agency at the Brookings meeting in August.
Posted by David Shlaes at 4:14 PM