One of the most important issues in the development and marketing of a new antibiotic is the breakpoint that is ultimately assigned by the regulatory authorities.  For the uninitiated out there, this is the way clinical laboratories determine whether a given bacterial pathogen identified in some clinical specimen (urine, blood, sputum, etc) is actually susceptible to an antibiotic or not.  This determines whether the antibiotic is likely to work for a given patient’s specific infection.  It also determines, for each pathogen, how many such infections will be “covered” by the new antibiotic and therefore how useful it might be for physicians and their patients suffering from infections caused by that pathogen.  It makes no sense, for example, to study an antibiotic for infections where only 50% of those infected are likely to be covered unless no other antibiotic covers the infection at all.

So – how does this work?  Each pathogen is assigned a breakpoint corresponding to susceptible or resistant (and sometimes intermediate) for a given susceptibility testing method – and there are a few out there.  Mainly it is a zone of inhibition of growth of the bacteria around a disk placed on an agar plate.  It may also be inhibition of growth in panels containing wells where the antibiotic is diluted stepwise. The level at which the cutoffs for inhibition zones or for concentrations that inhibit growth correspond to susceptible are determined by the regulatory authorities – the FDA for the US and EMA for Europe - mainly.  How do they do this?
For the most part, the regulatory authorities rely on the susceptibility of organisms studied in the clinical trials provided by the sponsor.  For example, if you determine that all the staph strains in the world are inhibited by your antibiotic at a concentration of 10 micrograms per ml, if your clinical trial only enrolls patients whose staph strains are all inhibited at 1 ug per ml, your susceptibility breakpoint will be 1 ug/ml assuming that these patients were actually cured in your trial. That means, even though your antibiotic may actually work against strains with much greater levels of resistance, no one will use it to treat such strains since they will be labeled by the microbiology laboratory as resistant based on the cutoffs assigned by the regulatory authorities.

Of course, because we know so much about how antibiotics work based on animal models and based on modeling of how the antibiotic works in people, we can frequently predict with great accuracy that we can actually predict that patients with pathogens requiring 10 ug/ml of antibiotic to inhibit growth would actually be cured in clinical trials.  But – if you haven’t shown this, it is very hard to get the regulators to agree that this is a reasonable cutoff. 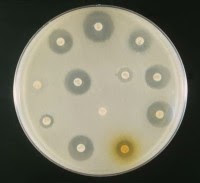 This is a terribly important point since it might mean the difference between being able to market your drug to 50% of patients with a given infection or 90%. But it amazes me that we really pay so little attention to this in the early days of developing a new antibiotic.  We need to consider how to get patients likely to have organisms with higher levels of resistance into trials (both for the comparator and for the new drug) to justify higher breakpoints.  But the regulatory authorities need to pay more attention to our predictive powers using pharmacometrics to help establish higher breakpoints than might be justified by the patients re3cruited into our trials.  Although both Europe and the US pay lip service to this concept, it is practiced more in the breach than the observance.

Complicating the picture further are the roles played by the Clinical Laboratory Standards Institute in the US and EUCAST in Europe.  EUCAST analyzes all the relevant information and makes a determination of both a breakpoint to be used in epidemiological reporting – to survey for emerging resistance – and a separate breakpoint for clinical therapy.  The EUCAST breakpoints become the breakpoints for the EMA in Europe.  In the US, the situation is more complicated – or maybe less so depending on your point of view.  The Clinical Laboratory Standards Institute (CLSI) determines breakpoints for susceptibility, but these have, in a way, little meaning since the only breakpoints the manufacturers can use are those provided by the FDA. If a given hospital or laboratory wants to alter their breakpoints, for those antibiotics and pathogens where the FDA and CLSI disagree, they must do so on their own responsibility.  But as long as the device allows for this to happen, the individual hospitals or laboratories can initiate this change.

Finally, when I asked one of the testing device manufacturers whether they had any skin in this game, the response was, “no.”  They will sell their devices and kits regardless of FDA, CLSI, EUCAST and EMA pronouncements on breakpoints or even regardless of whether a new antibiotic is approved or not or whether the new antibiotic is used or not.
I will follow this up with more details on specific EUCAST, FDA and CLSI viewpoints in future blogs. In the meantime – I hope you are all as confused as I am.