FDA and Community-Acquired Pneumonia - GETTING THERE. 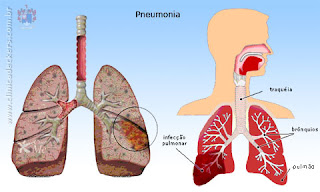 As I noted earlier this week, The FDA has just announced two days of advisory committee meetings on clinical trial design in pneumonia. November third will cover community-acquired pneumonia and November fourth will cover hospital-acquired and ventilator associated pneumonia.  The briefing materials for CABP and HABP/VABP are now available.  I have now had a chance to review the materials for CABP. The FDA is to be commended for listening to feedback and for responding.
One key area, the proscription against use of any prior antibiotics, is left open for discussion at the AIDAC.  The FDA’s position is that, based on data from the daptomycin trials, patients receiving prior antibiotics do better than those who do not both at early and later endpoints. The FDA’s suggested solution is to try and find ways to speed the enrollment of patients such that they do not get a dose of antibiotic prior to enrollment. Are they going to ask the people who can actually deal with the logistical issues of this approach in the setting or clinical trials?
I have focused on NI margins and the analysis populations proposed by the FDA since these affect the numbers of patients to be enrolled.  I view this as a critical area for concerns around feasibility.
Here are the FDA’s proposals – 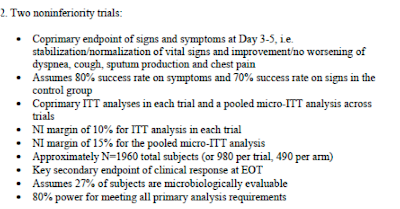 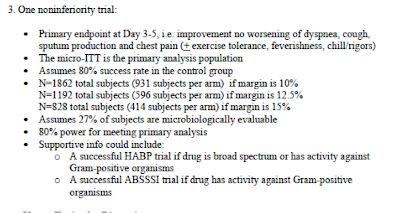 The table below is provided in an appendix. 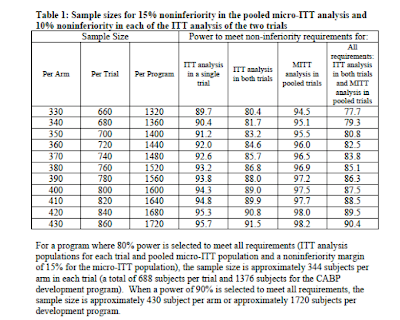 Option 3 would allow for a single trial assuming there are other clinical data such as a successful trial in skin infections.  In this case, for a single trial, 828 patients would be required in ITT in an 80% power trial with a 15% NI margin.  This would provide the 223 microbiologically documented patients required. This would actually be feasible!

Even the two non-inferiority trials where the mITT population would be pooled with a total of around 1300 patients would be at least approaching feasibility.

The FDA asks for advice on trial design for oral drugs when an IV formulation is not available.  Why not use the same approach?
Trials at 90% power with lower enrollment requirements would require an  increase in margins or an increase in diagnosis rate or both.  In my view, if you discount the FDA treatment effect discounting (see blog on discounting) there is plenty of room in the treatment effect for pneumonia to allow for a more generous NI margin.
I will post a blog on the HABP/VABP briefing material as soon as I can get my arms around it . . .
Posted by David Shlaes at 3:59 PM